Then, there are the questions that give us triumph:  "Where were you when Neil Armstrong took his first step on the moon?" "Where were you on D-Day when the troops stormed Normandy?"

For ten years, we have been asking each other this question, "Where were you on 9/11?"

Today, we ask ourselves this question: "Where were you when you found out Osama bin Laden was dead?"  Perhaps this question brings relief to some of you - relief of the ten years of hunting a terrorist, vindication for the many lives lost, hope for the future...

Where was I on 9/11?
I was in Pinegar apartments, my junior year of college.  I'd been following the news like a hawk in preparation for my Public Relations admittance exam.  As I stumbled out of bed to get ready for gymnastics class, my roommates pulled me into the living room saying something like, "You are probably going to want to see this."  I saw on my 27-inch tube television an image of one of the twin towers, smoke billowing from inside.

I remember walking to class trying to tell everyone I encountered what had happened.  Before the days when everyone had internet at their fingertips, time on campus typically meant being out of touch with reality for a bit.  We were all shocked.  I don't think any of us realized the ramifications of the events of that day.  My parents called me and told me to fill up my gas tank because gas in Ohio was over $4/gallon (in the day when gas was typically $1.50).  One of the questions on my PR entry exam was, indeed, "Who was the mastermind behind the 9/11 attacks?"  That same PR entry exam started my path towards my New York City internship in 2003, where we visited Ground Zero on our first day.  I've taken many friends to this site since then.  I never could get my sister there until this past Thanksgiving when our hotel overlooked the construction for the new memorial - she was too afraid of the emotional impact the destruction would have on her.

Where was I when I heard the news about bin Laden?
I was sitting on the couch with my friends Ann, Megan, and Nichole at my dear Nichole's house in Draper.  I received a text from a number I did not know - "Osama bin Laden is dead.  The US has his body."  I thought it was some kind of texting hoax and if I texted back I was going to be charged some preposterous fee.  We all laughed at the absurdity of it all.  Minutes after we parted, Ann texted me to let me know my unknown texter was legit.  Nichole, Megan, and I then walked into the home of our friends Luke and Jonathan.  On the television, the news flashed through on every channel and they had the articles pulled up on the internet.  The whole world was abuzz with equivalent amounts of rejoicing and sorrow.

I ask you this: Where were you when you heard the news about bin Laden?  9/11? 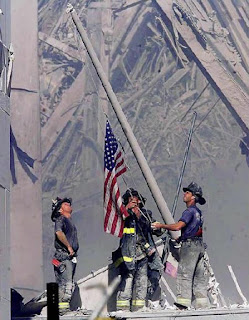 My friend Blake, who is now the director of the improv team, is the one who first told me about the planes flying into the World Trade Center. I was sure it was a joke.

I was waking up for work when I heard my sister call from the living room "MOM! There's another one flying into the tower!"

I remember hoping everyone would be ok, and feeling ridiculous because I knew that wasn't the case.

9/11: Getting ready for class, SUU, my boyfriend was scheduled to perform in between the two towers at 10 AM. He had slept in that morning. I fell to my knees the second the first tower had been hit and I felt like I was going to throw up. Walked to class listening to the radio in my ear the whole time. Classes were canceled and we all watched together from the large commons rooms. It is all a fuzz now, but I remember praying really hard all day.

Bin Laden: Watching a movie with my room mate, a friend walked in and told us. I thought... "I hope it changes something." I really hope it does.

Holy Snot, Melissa! The stories we never hear because we never ask the right questions...
I find it surprising that everyone truly does remember where they were that day - no matter how insignificant of a place.

I also hope that this ends up being a change as great as man on the moon or D-day...but it could be shockingly insignificant. I've got hope.

I'd been home from my mission less than 2 months and back at BYU about 2 weeks. I didn't have any morning classes so I slept in, well, stayed in bed for as long as I could, but I could hear that the news was on loudly in the front room. I had intended to watch the devotional at home, but when I emerged from my room, my roommate told me what had happened and told me that President Bateman was going to conduct a prayer meeting at the Marriott Center. So, I got dressed as fast as I could and ran up there. It was such an awful morning, but it was cool that there were so many of us in that stadium gathered to pray for the victims of the towers and Pentagon.

I was with you yesterday when I heard about Osama. I still can't accept the reality that he was found and is dead -- it happened so quickly. I hope, too, that this is a big event in the overall war against terrorism!