All of Salt Lake City is in an uproar over this tiny little group called U2 - heard of 'em?

The University of Utah is shutting down their entire campus at 2:30pm to accommodate for the concert at Rice-Eccles stadium.  I heard radio interviews this morning with attendees who have camped out overnight in the 40-degree weather and rain.  Utah's commuter rail is running extra trains tonight.  My co-workers are all going crazy with excitement, most of them taking off time from work to get to the concert early or to come in late tomorrow morning.  One of them is even calling the lunch she brought in, "The Bono Special."  I have no idea what that would even mean.

The thing is, and many of you may blacklist me after this, but I don't care so much for U2.  Sure, I enjoy their music, but, to me, it all starts sounding the same after awhile.  And, have you seen Spider-man: Turn Off the Dark?  Cause I have.  And Bono was responsible for the music that, all critics will agree, is monotonous and unmemorable.  I've been to a U2 concert.  I commend the incredible performers and musical genius they entire group possess.  I commend the energy the crowd emits.  Yet, I don't care to ever attend another of their concerts.  I'm more of a Bon Jovi girl I guess, cause I enjoyed myself much more at his concert. 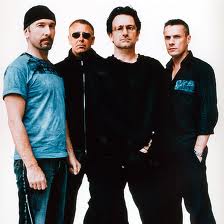 Finally! Someone who shares my opinion. I've been keeping quiet about U2 for fear I'll be strung up by my ankles and tarred and feathered.

I've never been a U2 fan. Yes, I know their songs, but I don't find myself replaying them over and over in my head. I don't get what the big deal is with them. I don't think Bono is attractive, or a noble humanitarian. I don't think their songs are clever. And I don't know why anyone would pay $150.00+ for a ticket. LAME-sauce.

That was one thing I appreciated so much about Bon Jovi - he was talking and then said, "I'm not going to talk any more, I'm going to do what you paid to come here and see me do." And he sang. Bono went on and on about his outside efforts the last time I saw them...and quite frankly, I didn't care and it bored me and weirded me out that the whole audience was cheering for what he was saying when you KNOW that at least half of them could have cared less.