The Standing Ovation Phenomenon in Utah

If a production absolutely knocks you off your feet, then you get on your feet at the end of the show to applaud.  This is what we call a "standing ovation."

I have participated in audiences from L.A. to San Francisco to Alaska to Hawaii to New York City (dozens) to Ohio to Florida to even Branson, Missouri...you get the picture.  I've seen more than my fair share of productions.

Utah audiences have this unique approach to the standing ovation, the likes of which I have encountered nowhere else.  I think it would be fair to state that at the conclusion of an artist's performance, the audience milks it more than the actual performer.  They have this innate know-how and drive to get exactly what they want - more performing.

Here's how it goes in Utah:
1. Performer (theater, concert, or otherwise) gives their best performance and concludes their performance
2. Audience jumps to their feet and claps in uproarious thunder, regardless of if the performance was actually good or not
- Shouldn't a performance be noteworthy to earn such a special kind of applause?
3. Performer re-enters the stage for the encore
- Most performers are all-too familiar with the encore and have one prepared
- After encore #1 is when most audiences know the show is complete
4. Utah audience continues to clap as if trying to shake down the rains from heaven
- Performer re-enters and performs yet a second encore, most at least have a trick
up their sleeves
5. Utah audience continues to clap with all the gusto of a stampeding heard of buffalo
- Performer re-enters and most often will say they don't have another encore
prepared, thank you, and please go home
6. Utah audience still doesn't get it until the lights in the theater come up and the stage begins to clear of anything that resembles a performer

I have actually seen five encores before while attending the performance of a Broadway diva with the Utah Symphony.  Five!  Can you imagine?

I'm curious as to how this all started.  How did Utah audiences start clapping and never stop?  How do they all seem to just know they should do this?

I'm sure when you think of "musical," Bonnie and Clyde is not exactly the storyline that comes to mind.  But let me tell you what - Utah Repertory Theater's production of Bonnie and Clyde, as strange a concept as that is, sparked my interest in the actual historic events of Bonnie and Clyde to the extent that I spent several hours researching the story.

I wanted to know the truth or not-truth of these seemingly unbelievable events.  Was I ever surprised!  Creative liberties aside, the musical did a pretty good job conveying some of the parts about which I thought, "That couldn't be true."  Did you know Bonnie was a poet and predicted her own demise?  I found this all surprising because (I am guessing that most people of my generation and younger are in the same boat as me) I have never seen the classic film starring Warren Beatty and Faye Dunaway.

For those not familiar with this infamous duo, we can sum up the story to say they were two 1930s southern outlaws in love, leading a murderous crime spree which ended in their gruesome deaths.

I had a little bit of difficulty finding Lehi Arts Center, where the production is housed, simply because my AppleMaps decided to take me on an adventure.  I showed up 6 minutes late, but Utah Rep caters towards Utah audiences who are preternaturally late, and I ended up being seated without being rude.

I immediately noticed the decor.  I absolutely fell in love with what they did with the space.  Each character is based off of an actual historical figure, which means we have photographs of the people involved.  The production company decided to recreate scenes and costumes to match existing photographs, then placed the actual character photo next to the cast member's photo.   To match this theme, at the conclusion of the show, they showed actual footage of the final ambush of Bonnie and Clyde.

The set is solid and perfect for the show, including a car they move on and off the stage through the set.  I'm not sure how the accomplished such a feat in the prohibitive venue, but it absolutely works thanks to the design of Steve Twede.  You will see the live accompaniment group off to the side, for which I say, "Kudos" to the director, Anjanette Mickelsen - she was paying very close attention to the actors on stage and spot-on with cues.

We first meet Bonnie and Clyde as adorable youth (Abigail Parkinson and Kimball Bradford), one with a dream to be a star, the other with a dream of becoming an outlaw.   The introductory song transitions into seeing the duo in adulthood shortly before they meet each other. Cue the entrance of the absolutely mesmerizing Madeline Weinberger as Bonnie Parker.  Can I say she was sheer perfection?  She alone is worth the price of admission.  I could not find a flaw with anything - her acting, her singing, and her movement were all exact.  Everything about her performance lead me to wonder what on earth this talent is doing on a stage in Utah County instead of in New York City.  Johnny Hebda as Clyde is a talented man with a wide range in acting and a lovely voice, but the role, for me, simply was not a fit in vocal range and the rough-and-tumble persona required to convince the audience he is murderous outlaw Clyde Barrow.

Buck Barrow, Clyde's brother, is the next character we meet after he has busted out of jail.  Of course the ladies then burst into a musical number about how he needs to go back to jail.  This is the part of the show you will find yourself giggling and smiling the most, as the women are in a beauty shop and bossing this fugitive around...you just have to see it, it was great comic relief.  I think it was around this time that there was an absolutely hilarious scene where a deputy tries to seduce one of the women with his gun and she is falling for it.  However, this side-action upstaged the dialogue of the main characters to the extent that the entire audience was laughing and we couldn't even hear the conversational exchange.  I hope I didn't miss anything important.

Throughout the production we meet many more characters, all of whom are integral to the action and ultimate demise of Bonnie and Clyde.  All of the actors and actresses lived up to my expectations for what I have come to know of Utah Rep. I was impressed with Christopher Bradford's vocal manipulation to have this soulful, gravelly voice as the minister.  He later sings in a more classical musical theater style, both of which are impressive.  I also appreciated the character of Blanche Barrow, Buck's wife, portrayed by Michelle Moore the night I attended, but Twyla Wilson on others.  She has some sassy lines which surprise you from what you can tell is supposed to be the straight-man character.

But can I tell you who really won my heart?  Dallin Major as Ted Hinton, a man who played a large part in the final ambush of our outlaws.  Major convincingly portrayed a love-struck lawman torn between what he knew about a young girl and the reality of the law in front of him and he did it all while singing the sweetest melodic tones your eardrums could ever wish to hear.  I hope my company for the evening is alright with me confessing on her behalf that she said emphatically after the show, "His voice changed my life!"

I have to give shout-outs to several of the ensemble members.  Kira Knorr has an absolutely angelic voice -  we heard her soprano as she was walking through the aisles next to us. Cara Baker as the bank teller may have only had a few lines, but she delivered them with great characterization and panache.  Few actors can develop a character like hers in such a brief moment.

One word of advice for Utah audiences - know the show you are going to see!  I cannot tell you how many times I have seen audience members walk out of a production because of an inappropriate word or joke or scene, and this show was no exception.  My question is, "Why were you there if there was what you consider to be questionable material?"  Bonnie and Clyde were outlaws in love - they slept together, they swore, they killed.  If you are not prepared to see a show that contains that kind of content, then this is not the show for you.  That being said, the show would be rated a soft PG-13 if it were a movie.  Utah Rep has a content advisory on their website for the show listing the possible offenses you can check out here if you are wondering.   Also, be advised there are simulated gunshots in this production and the are loud...very, very loud.

If you are interested in seeing a different kind of musical that has never been produced in Utah and has only been produced nine times since closing on Broadway, then you definitely need to see Utah Repertory Theater's production of Bonnie and Clyde at the Lehi Arts Center.  You will be thrilled to find yourself in an intimate setting surrounded by a marvelous level of talent and absolutely enthralled with the story.  Be prepared to carve out some extra time for yourself to go home and do a little more digging on the truth of Bonnie and Clyde's lives, I know I absolutely couldn't resist.  In fact, if you are at all thinking about seeing this show, you will be making a huge mistake if you don't go. 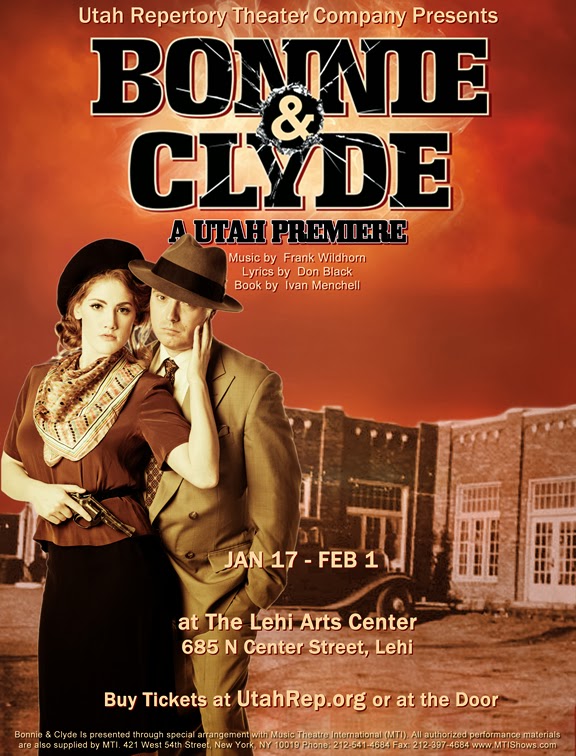 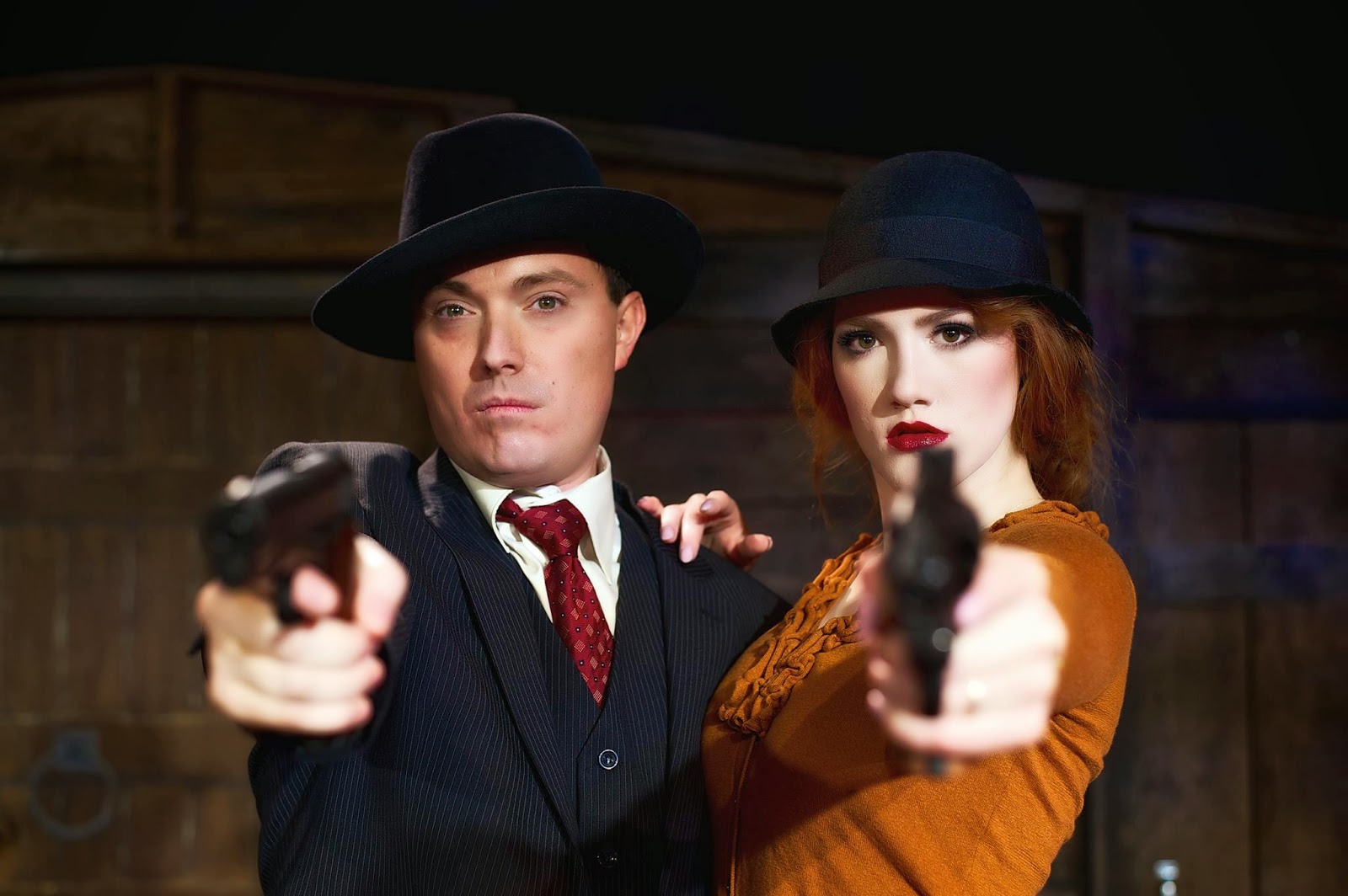