1. My dearest roommate Cassie left for grad school in Denver! I will most definitely miss her! This was our last outing to Leatherby's the night before she left. 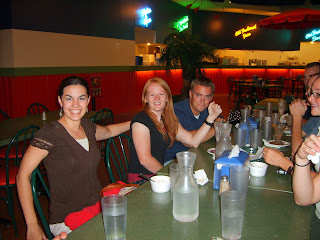 2. A guy in our ward, Stuart Memry, came over last night with a can of shaving cream, a razor, and a very strange request for Andrea - to please shave his neck! I told her she should show up at his door with toenail polish and ask him to paint her toes! Weiiiiiiird! 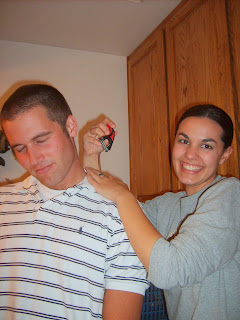 3. My new roommate, Dacya, got a kitten. Kitten is nameless as of yet, but Andrea and I now lovingly refer to her as "Ms. Peebody." On day two of Ms. Peebody's residence at our apartment, she diarrhea'd all over my down comforter and I had to pay $30 to get it dry cleaned (thanks Brit for running that errand!). Right after I brought the blanket back home and placed the cover on it, she smeared her little poo-plagued bottom on the cover! I managed to get that off without another cry-cleaning bill though. Now, ends up Ms. Peebody likes to poo in this particular corner of my room (or anywhere else when the urge hits) and has started peeing! She will cry really loud right before, so as soon as any of us hear her cry we RUN and grab her and put her in the litter box. She looks innocent enough, buuuuut...AAAAAARRRGH! 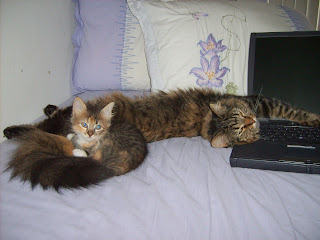 My Workout with Lindsey Lohan

I was at Gold's Gym doing my normal sweat and disgust those around me thing when I noticed the girl on the treadmill in front of me looked an awful lot like Lindsey Lohan. Lindsey is in Orem, UT for rehab after all, but never you mind that, I just kept about my business.
I go to the weights and do some stuff, then go into the dance room to do legs and abs. She started talking and sounded just like Lindsey, then her trainer/assistant started calling her Lindsey. That's when I realized - the girl really IS Lindsey Lohan. I was alone in that room with her and her trainer for 5 or 10 minutes. Once I realized it was really her I wondered if I was supposed to have been locked out of the room or something because the gym was packed and no one else was in there. I was pleased to see that she was doing most of the same exercises as me, only not as much. Yeah for my buffness! Of course, I'm not recovering from any addictions or anything, so...yeah...anyway.
Then it ends up my gym bag (she was not at the gym when I arrived) was right next to her assistant, so every time I needed something from my bag I had to go and invade their territory...but hey, my bag was there first!
So I bet you are all wondering, how was she?
She actually looked great! She was running hard on the treadmills, lunging, and other lifts with coordination and effort. She said to who I think was her trainer (who was wearing a very fashion disaster shirt with a maltese dog on it!) several times in an upbeat way, "Just tell me what to do and I'll do it!" She definitely did not seem inebriated in any way and she isn't too skinny either...thin, but healthy! I think, no matter what most people think of her, it is good to see her doing better! I also wanted to mention I never heard her say a single swear word, not even harsher words like dang or crap, nor did she say anything bad about anyone around. Her and her personnel were getting a kick out of people watching and laughing about people's gross gym habits. She would have loved it if she would have been there when the mid-40s larger white guy Michael Jackson impersonator were there! Paparazzi snapped her as she left (I happened to be getting into my car as this happened).
As non-exciting as this information probably is to all of you, NOTHING happens in Orem, Utah. I even overheard her assistant saying that very line and I agreed with her and said something to her before I actually realized who she was, no wonder she looked at me as if I were crazy. I knew the Michael Jackson impersonator wasn't the only person I'd see if I perservered in my gym attendance! Every day for 3 years and finally I get my brush with...celebrehabity.

The picture is of a couple of paparazzi - most of them got away before I could photograph them! The white van to the left is the getaway vehicle.