I wonder this sometimes, "What kind of person has nothing better to do than to insult random people on the internet?"

If you watch a live theater performance, do you think that what you see on the stage from an actor is his or her real life personality?  I should hope not.  Why, then, would someone assume a small representation of my writing represents my entire personality and life?  Without ever having met me and spent quality time with me, I say you are far removed from the truth.

I write in this format to share thoughts and goings-on with my friends, family, other loved ones, or anyone who comes across the information and feels it resonating with them.

More recently, I've only been writing about theater, as I can do that with an element of displacement.  Why?  There are some nasty strangers out there.   Strangers who want to destroy my self-worth and personal life.  I've thought over and again, "It's not worth a personal attack."  I fiercely love my people and that kind of love also brings about a fierce sensitivity.

I've decided that I'd rather write than cower.  The thoughts I receive from love far outnumber those from hate.  Hopefully I'll have more stories for you soon...like...maybe...the engagement?!

Finally!  A show for the kids.

Did you know Red Riding Hood has 2 sisters?  Parents who are addicted to television?  A Fairy Godmother who sings the blues and twirls baton (oh, that's me!)?  Come check it out and meet all the fairy tale characters your children love!  Stick around to see what kind of work I produced in my first go-around as choreographer in the 50s musical olio. 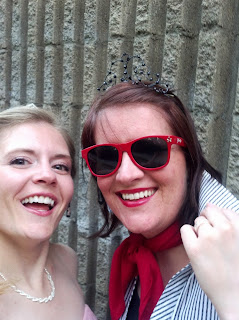 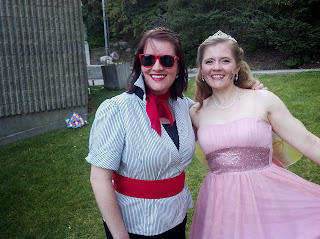 Walking into the Murray Theater last weekend, I couldn't help but let the edges of my mouth curl into a grin.  One thing I have got to give Johnny Hebda's Utah Repertory Theater Company is that they always do their darndest to create atmosphere for their patrons.  In What the Bellhop Saw, you will find your tickets at a hotel check-in desk in the hands of the hotel staff, after which the bellhops usher you to your seats.   Who doesn't love feeling a part of the show and removed from the real world before the show even begins?

My impressions were further reinforced as I gazed up on the stage in wonderment at the set.  I've been to the Murray theater many times and never expected to see a 1940's art deco hotel room constructed on the stage.

What the Bellhop Saw, is a farcical comedy set in a New York City hotel.  The actual era of the show was a little lost on me as I know it was written in 1989, however music from the 1940s through today played throughout the show and the characters dressed in 1940s-style clothing.  As far as the storyline, you've got a man trying to seduce is secretary, a scheming brother, a terrorist, a manly jealous wife, and a sleep-your-way-to-the-top maid.  That's really all you need to know.

I don't want to get too into the plot, as that's not what creates the fun about this show.  You've got cheesy, "Naked Gun"-esque lines, like a pantsless man stating, "You scared the pants off me," visual farce such *spoiler alert* a man dressed as a woman, and staging that constantly has your eyes darting from one side of the stage to the other as the actors run in and out of the room in dizzying array.  Kudos to director Chasey Ramsey!

Arlene, the jealous wife played by Jake Suazo, is physically hilarious and daunting, yet he often seemed on the verge of a smile.  When you see the show you can tell why he'd want to bust up laughing at any moment, alas the cruelty of the character isn't as sharp as it could be if you think the character may chuckle.  Thank heavens the only things truly busting up were the buttons off the bosom area of his dress.  Wardrobe malfunction or intentional, I covered my mouth to keep myself from giggling too loud every time I noticed.

The only tidbits that rubbed me the wrong way were a few lines I like to call "throw away lines."  These are strange transitional lines that seem to make no sense in the course of the show, yet the writers throw them in anyway.  I thought most of these were cleverly hidden, but a couple fell flat and stalled the pace of the show.

Expect lots of yelling (hallelujah the actors are not miked so the yelling is awesome instead of shrilly busting out eardrums), lots of running, slamming doors, and fast-paced action.  I cannot tell you how impressed I was with this troupe rarely missing a beat of the frantic comedy pacing.  The first half of the show is about 45 minutes, while the second half less than thirty.  This is refreshing after too many a 2.5 hour show.

I appreciate a group wanting to do a show simply because it is fun...it's refreshing.  I don't think enough people celebrate zaniness for the sake of zaniness.  Sometimes we need a show that reminds us that acting is fun and life is silly, pure and simple.  Not enough theaters in Utah attempt to embrace the fluff of comedies of the physical, mad-cap comedies of old.  One of the actors in the talk back session after the show stated, "This show is nonsense and it celebrates that."

Director Ramsey stated my summary of the show best in his production notes, "...It will not change your life, and it won't even make you think.  We do this to allow you to escape, laugh, and simply find freedom from stresses and blemishes in your lives."