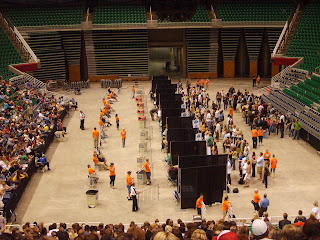 So, yep, you guys guessed it - I eloped! J/k. Tempting though.
I auditioned for American Idol. I have long stated that I am a Broadway singer, so I'd never make it through. I had many dissenters and I thought, "Hey, it is 15 minutes away and it sucks saying I never even tried!" So, I went and auditioned.
I saw my friends Brittany Belinski, Jeff Hofman, Rob, Steve, and a few others. I made friends with my neighbor from Maryland who had auditioned 3 times. Clarissa in the food line, whom we talked to for 30 minutes, friggin' ROCKS and made it through, so I hope to see her on TV. The girl singing next to me made it through too and I gave her a HUGE smile and thumbs up b/c I knew she made it through before she did! I hope I see her on TV too!
Before you start your condolences, I, for newfound reasons, did not and do not care about the auditions - it was one of those things you just want to exclaim "I did it!" I sang Patsy Cline's "Crazy."
Monday night my current beau of a couple months decided to put things on hold for awhile. I was up most of the night and morning sobbing. I realized during the audition process that my relationships are much more important to me than singing. I watched all of these people who would give their lives to go through and I was just amused with saying I'd been there!
The inside scoop about this show?
1. This is a show being cast like any other sitcom - they have set character roles they want and are looking for the best actors to fit the parts.
2. Only about 1 in every 100 get through the first round.
3. There are 2-3 rounds before what you see on TV.
4. The preliminary judges are much harsher than Simon will ever be.
5. They put you on lock-down for HOURS and you can't leave until you audition and they make you pay $4 for a drink!
6. There really are crazy people there...but only about a dozen...and they all get put through because those are the characters being cast. Carry a puppet and that golden ticket is yours.
7. I am now 100% sure Broadway is my forte - I feel no passion for pop.
8. I always thought singing for a living would be a dream-come-true, perhaps it would on the stage, but I now realize my dream is being with the people I love. I know, you could practically make syrup with all my sap, but it is true:-)
9. 100's of INCREDIBLE singers did not make it through. I'm serious. I heard 100's of people who are BETTER than half the finalists we have heard in the past. Don't ask me how they pick 'em - I'm more lost than ever!
10. The possibility of fame brings out the animal in most people.

That's that! Any questions?
Posted by Larissa at 5:11 PM 2 comments:

Tomorrow I am doing something outlandish. Crazy. Whimsical. I'm taking a day off of work for this. I'll update you after it happens, but I would love to see what kind of guesses you all have:-)
Posted by Larissa at 3:01 PM 6 comments:

I have a new job!
I am still with the same company, however, they have given me an opportunity to utilize my degree in Public Relations. I will be working with the marketing team and also traveling 2-5 business days per month visiting our local chapters throughout the country. I'm pretty excited, after five years of working in a non-degree related field, I finally have the chance. Hopefully all this travel will also provide me with an opportunity to knock off the final 4 states (Washington, Oregon, Hawaii, Alaska) from my list of visiting all 50 states before I'm 30!
I'm also excited (ok not really) because my gas station "fried baby chick" giver has started hitting on me again. I safely visited about 3 times before it started. Time for another gas station detour.
Posted by Larissa at 11:40 AM 4 comments:

I went to the infamous gas station of the fried baby chick a couple of days ago. As I headed towards the check-out a nice gentleman let me in front of him.
I said, "Thank you!"
He said, "You are very welcome. And, you look very nice in that dress today! Mmm mmm!" Looks like he had a check-out of his own!
I laughed and repeated my thank you before paying and heading on my way.
Looks like I have a lucky gas station - or not.
I have been hit on by hispanic men, Indian men, and several black men (this guy being one of them), but never by a white guy. Why?
Posted by Larissa at 9:14 AM 1 comment:

My little Conor girl and I want our dearest Fatty Cyrus to know that we miss him and his moobs. We love you, Fatty! (and to clarify any misunderstandings - Fatty is definitely alive) 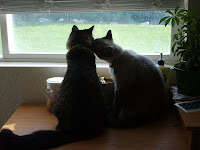 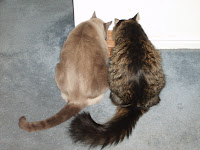 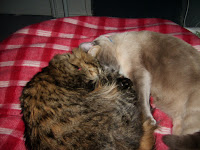 Posted by Larissa at 8:53 AM No comments:

What a great 4th of July weekend!
Thursday I went boating with some friends (5 of the 9 who road tripped to San Diego in August of '05). I happened to be fully clothed because I didn't know I would get to go when I left for work that morning - and I got dumped in the lake! I'm glad I had that mishap because then I got to do all the tubing madness!
Friday I went to a driving range for the first time. I hit between 100 yards and 150 yards pretty regularly, but have no idea if that is horrible or good for a first timer. My right forearm muscle is sore. I went to a BBQ later with about 40 folks from my ward, then watched fireworks at my friend's house across from Murray Park.
Saturday morning I drove to Marysvale, Utah - the place where the Uranium for the atom bomb was mined. I got to go shooting for the first time and I did the impossible - I made a Budweiser can hole-y (ha ha)! Pistols, shotguns, rifles - I shot them all! Later that evening I went off-roading up the Piute trails. I am so blessed and lucky - to think so many people haven't ever had the experience of seeing the beauty of this earth!
Sunday I hauled it back to Salt Lake just in the nick of time for 1pm church. A friend cooked lunch for me and we just chilled together with my kitty for the rest of the day.
Life is good. 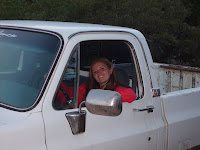 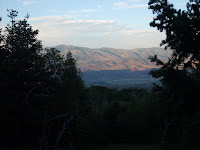 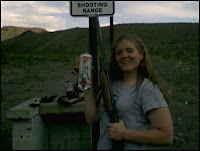