As I get older, I often worry if I am becoming "hardened" or "past feeling" because I don't feel as upset about something in my life as I did when I first went through the experience.

I read this thought today that helped to calm my worries:
"When we first encounter or anticipate a difficult or painful life circumstance, we may be overcome with fear, dread, shock, or horror. As we come to terms with these life challenges, we begin to accept them for what they are. This frees up our mind to actually start working on productive solutions or adaptation. As you begin to accept things as they are, you become less frantic, and can actually have more influence on potential outcomes."

I feel a little as if I am walking around on a broken foot. Sure, I can make it look easy and painless and even quite normal, but inside I am aching with every move. Just because I am walking and learning to move doesn't mean I don't hurt. Part of me feels I have to keep hurting to remind myself how much I cared, how much I still care, how much I will for some time to come...

Good to know that accepting this and healing will never take away from the sincerity of those feelings.

I'm not big on the woe-is-me blogging, yet I am going to do it.
I feel like my recent situation is an occasion that has frequented me all too much the past year and a half. Maybe this is a good thing - these men breaking up with me...it means I am dating and every failure leads me closer to a success!
Each man I date I feel I care about more than the last (with one exception). I feel as if I am closer and closer to being exactly who I want to be in a relationship. Yet, each time....they dump me. I almost wish I could say there were something legitly wrong with me or that I was a little crazy...anything to explain why they just don't want me.
I am well aware of all of the cliche thoughts: "It will all be worth it in the end," "You deserve someone who wants to be around you all the time," etc. But that doesn't make this any easier. At this moment, I want to be with the man who just broke my heart. I'm even good at getting dumped - I shower him with compliments and tell him how wonderful he is...who does that?!? Yet, I honestly feel that way. I care so sincerely. I wouldn't date him if I didn't truly care for him, so why on earth would I ever be cruel? I just don't have it in me. Then there is that part of me that hopes they wake up the next morning realizing what a mistake they have made and they will come crawling back to me. But they never do.
I know some man will have the right broom to eventually sweep me off my feet without knocking me to the ground. I would love to think this latest young man will realize he knocked me over and come back to pick me up...but I can't count on it...even though he's probably the best man I have ever dated. I only write this because I know he doesn't read my blog.
I'll be fine. I have so many dear friends who love me so much (and I, them!) and I realize I can't be that big of a reject if they can love me and care for me. I'm just tired. I have no idea how many more times I'm going to have to live these experiences and I would gladly give up those sleepless, tearful nights of joyous images running through my head like a movie...knowing I'll never get to live them again with that special person.
Posted by Larissa at 11:21 AM 3 comments:

I was out on a date with a wonderful young man who began to tell me about a movie I have not seen - rib sauce covering his face and all. I love when he tells me about movies because he gets so excited and uses such vivid descriptions.
My brain responded with: "Can I just tell you I love it when you tell me about movies?!"
My mouth responded with: "Can I just tell you I love you?"
WPIGJPW@@!&!
I immediately began laughing hysterically, not knowing what to do to cover this mother-of-all awkward slips.
I vaguely heard him quip, "Wow, with rib sauce all over my face and everything?"
We both got a good laugh, no one freaked out, and now I have an awesome story to tell:-)
Posted by Larissa at 2:19 PM 1 comment:

Sunday I got a call from LaserQuest saying they found my planner in their parking lot. WHAT? So I picked it up yesterday and the teenage girl working the counter smiled REALLY big and asked if I was Larissa.
Hmmm....something tells me those fools were going through my planner and everyone at her work today is going to be so jealous of her because she got to see who this mysterious Larissa is that they now know EVERYTHING about. Yes, I am one of those folks who puts everything in my planner. Ideas for gifts and dates, all my plans - I even enter retrospectively, addresses, commentary on dates with words or pictures, shopping lists, birthdays, travel arrangements, health information.....so...yeah...they stumbled upon quite the goldmine of juicy info...
Posted by Larissa at 11:14 AM 3 comments:

Eating Out - The Results

My goal was to save money and fat - the result? TOTALLY backfired!
I found myself taking up every opportunity friends extended to go out to eat. In fact, I found myself telling them they should invite me to go out to eat otherwise I couldn't and ends up this must be true torture for most people cause they would all invite me right then and there! I did one time take awesome Shayla out for salad cause she had a less-than-stellar week, but I hardly think that counts against me.
I found myself running straight from work to rehearsal and not getting home until 11, which meant a quick Subway sandwich or Wendy's dollar menu.
I found myself going out on dates more often than not and we all know men love to eat...and I like to pretend they like a woman who loves to eat. At least one of them does, I know that for sure;-) Since I was going on dates regularly and typically not paying, that means I would have spent even more if I were eating on my own.
I did obey the rules and never ate out "just because," however, I spent more money stocking up on groceries because I was eating out, then getting invited on a date or to go eat, then the food I bought would go bad! I had more food around the house, thus eating more often.

The end result? $25 more spent for the month and a few pounds gained! What the?!?
Posted by Larissa at 10:12 AM No comments:

As I sat at work, needing a little snackage, I pulled out my bag of Goldfish and realized, I cannot eat Goldfish crackers without singing, "I love the fishes cause they're so delicious!"
All together now - "Gone Goldfishin'!" 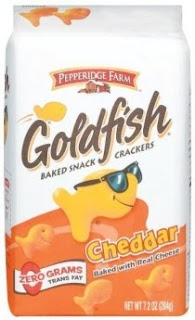 Meet Frank. He scares me every time I come down the stairs to my condo. 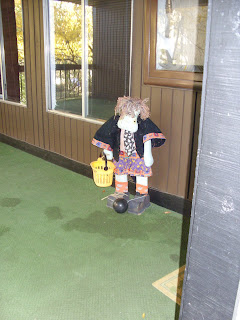 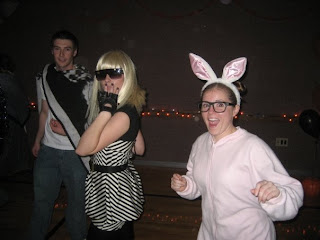 Also meet Lady GaGa and man-with-blanket-around-neck (thanks Dr. Tripp for reminding me!). He had the most hilarious crash and burn attempt I've witnessed in awhile. For future advice, neck-blanket man, when a Lady rejects you, leave - don't stick around for five more minutes awkwardly shuffling around behind her. And wipe up your drool as you walk away.
Posted by Larissa at 12:17 PM 4 comments: