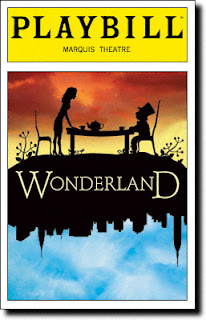 Wonderland is not only the first show we saw on our New York adventure, but the news also hit yesterday that it will be closing this Sunday, so I've decided to share my thoughts on this one with you first.

My friend, Melissa, recommended her friend's blog, Natalie Hill - Mormon in Manhattan - No Sex in the City, to me awhile back - she said we had a mutual passion for blogging and I'd love her.  Oh, and she's a Broadway starlet. Melissa was correct.  Conveniently, Natalie has been plugging her new show, Wonderland, and I decided to check out what all the fuss was about. 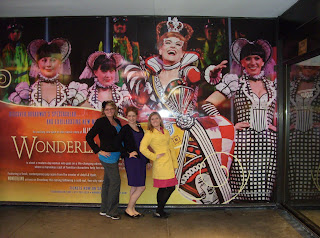 The Marriott Marquis has this fantastic sidewalk laminate thing for publicity outside of their theater.  If you look at this illustration through your camera lens, it appears to be 3-D...oh and it is stationed in front of a wall-sized screen playing clips from the show...right in the middle of Times Square...I'm sold! 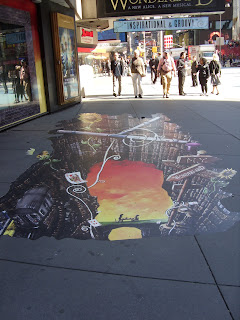 The plot was, well, Alice in Wonderland meets Manhattan.  A young mother, Alice, and her daughter, Chloe, move in with their mother-in-law during a temporary separation from Dad, who has lost his job and strained the marital relationship.  Alice hit her head on the elevator before falling asleep on Chloe's bed, sending her into the dream-world of Wonderland.

The costumes were dazzling, colorful, and invoked creative jealousy within me.  I do wish the human-animal characters resembled their respective animals a bit more, but don't think they could have given their characters the movement/dance aspects they needed if that were the case.  In the promo shots, Alice was wearing this amazing fuchsia wrap dress, but in the show she wore a fuchsia over-sized boho kinda top and some stretch pants...I preferred the dress, but my comrades thought the shirt/pants gave a more motherly vibe.

The sets were as spunky as the costumes and reminded me of the gardens in Central Park.  As a matter of taste, I would have preferred less reliance on the use of lighting and projection techniques and more on actual set pieces, but, again, my comrades actually loved this aspect because it can create more than traditional set pieces.  For instance, lighting projection was used to transform part of the stage into an elevator instead of having an actual elevator.  Another trick? To get into Wonderland, instead of shrinking when she drank the potion, Alice's door grew bigger.  This was clever, but made me think it was only done because there was no other way around this.

The choreography was, in a word, fun!  They have soft shoe, some leapers, wacky business, modern, and traditional numbers.  I wouldn't say the numbers required the athleticism of say, Lion King, but I never found myself wishing they were dancing more - everything seemed quite appropriate.  The sets, costumes, actors were all so over-the-top that more dancing may have actually been sensory overload.

The actors and actresses?  I never cease to be amazed with the caliber of those on Broadway - one look in the bio's of these folks shows some are experienced beyond experience and others are having their fledgling works on Broadway.  You'd never know the difference between the two.  I applaud all of them for getting through some pretty cheesy scripted lines.  The show is obviously a family show, with about half of the entertainment clearly geared towards entertaining the younger half of the audience.  The cheshire cat, El Gato - Jose Llana, for instance, had lost his ability to disappear, but all of his friends appeased him by pretending he was invisible.  What a spectacular display this ended up being:-)  My first thought was, "Oh, they can't really make him invisible, so this is a cop out."  But, man, Jose was so convincing, I couldn't keep from giggling...and hearing the children in the audience squeal with delight won me over as well.  Janet Dacal as Alice had this rockin' voice that blew me away.  Maybe I'm too used to community theater here, but I'm always worried someone's voice is going to squeak (yes, I've heard it on Broadway too - we are all human), but no worries here.  She's...Wonderful.  The ensemble?  Very united - I got excited every time I saw them all coming out - the large full-cast numbers were the best!  And the White Knight?  He can be my knight any day.  He was in charge of this boy band of troupes and I could. not. get. enough.  Tickle me to death.

My biggest downfall?  The cheesiness of the script.  I tried and I tried, but the lines just didn't flow for me and some of the actors weren't able to fully embrace every line in a manner convincing for me.  I found myself with an odd look on my face quite often.  Something simply didn't gel for me.  I hoped the show would run long enough to enable them to tweak that little something I can't quite put my finger on that was off to transform this into the truly fantastical Broadway show it is sooooooooo close to being.  BUT, would I see the show again?  YES! Yes! Yes!  Would I recommend it to those wanting wholesome, fun theater?  Absolutely!  The musical numbers and visual appeal outweigh the scripted cheese fest.

My biggest praise?  Ironically, the message hidden in the midst of the cheesetasticness.  Alice and her husband are having difficulties, but through the course of events of the show (her husband doubles as Wonderland's White Knight), she comes to realize that all he ever wanted was to be her knight in shining armor, her protector, her hero.  I took this to heart.  Too many times in my life I have pushed people away who want nothing more than to be my knight.  Why is it so hard for so many of us to accept a little help once in awhile?  To give others the opportunity to be to us all they know they can be if we simply let them?  This message may have slipped past the younger ones to whom much of the show was geared and crept straight into the hearts of most of us adults.  *gulp* Did I just refer to myself as an adult?  Ew.


This show will take off in the regional and community theater level much like Seussical did and everyone will love it.  Why?  Flashy costumes, giggle-inducing characters, a strong family message, ways to have every element big or small.  Now, let it be known, I am not a fan of Seussical at. all.  I am, however, a fan of Wonderland.   I only relate the two in the level to which I believe Wonderland will take off.  In fact, I'll say this now - Wonderland is much, much, MUCH better than Seussical.  Even through cheesy scripts, the script is at least comprehensible and enjoyable.  I laughed out loud and I can't get the song "Off With Her Head" out of my head for a week straight - two things that don't happen often.

Is it the best show I've ever seen?  Well, no, but does it matter?  Does the show deserve such a preliminary close?  I never would have guessed when I saw this show last week that they would close the next week.  Never saw that coming.  I've seen worse on Broadway open for much longer.  I was actually quite excited for the future of this show and saw great potential.  Blast those Broadway politics.  Here's to hoping I get to be a part of this one someday and that a not-too-distant revival gives it the re-vamp and attention it needs and deserves.

*UPDATE - 5/16/11* Closing night was last night.  Darren Ritchie (the White Knight) proposed to Janet Dacal (Alice) after the final curtain call.  How romantic is that?!?! 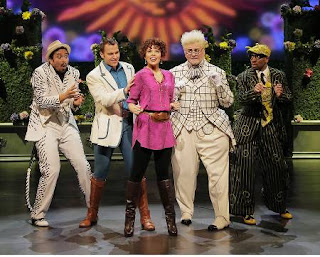 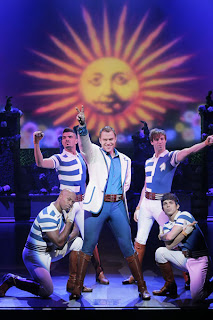 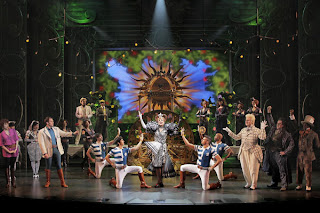 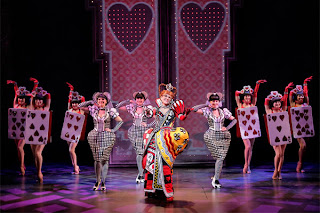 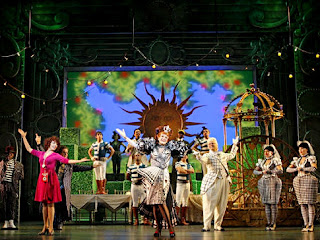 The Alice nerd in me is geeking out a little. I hope this goes the community theater route, too.

I adore your yellow coat! So freaking cute!

NO way!! I never would have guessed the two co-stars were dating! Or that the White Knight wasn't gay! But that's freaking awesome!!!