How To Succeed In Business Without Really Trying On Broadway 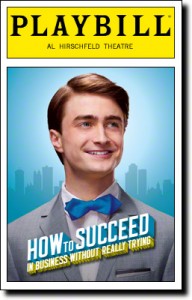 "Are you here for the show or are you here for Daniel Radcliffe?"And thus begins my experience with How to Succeed in Business Without Really Trying, our unanimously favorite show of the trip.

I found myself smack dab in the center, 5th row orchestra, next to this delightful older gentleman from Australia.  He takes a three week vacation each year to come to New York and see 21 productions.  The guy was serious about his show-viewing and I had to put him to ease a little that I wasn't some crazy Harry Potter fangirl there to hoot and holler and drool over Radcliffe the whole show.  I've been wanting to see How to... for at least fifteen years and know every word to every song.  Now, the fact that the show stars John Larroquette (J.B. Biggley), Tammy Blanchard (Hedy La Rue), and Daniel Radcliffe are added perks to my experience, but I'd have seen the show regardless.

The Plot
The curtain lifts and a man dressed as a window washer starts descending from the ceiling whilst reading an instructional book, "How to Succeed in Business Without Really Trying."  The lights brighten, we hear his voice, and then he flashes us a bright, shining smile - enter Daniel Radcliffe as J. Pierrepont Finch.
Basically, the title says all you need to know.  A young man with lofty ambitions, an "eager beaver," manipulates and lucks his way to the top of the corporate ladder, all while trying to win over Rosemary (Rose Hemingway).  How To... does not try to take itself seriously as far as the story, yet the characters within the story are delightfully real...at least we wish they were.

The Music
What can I say?  Here you have your classic Broadway show with fun, not-too-serious music you can tap your toes to, sing along, and smile smile smile.  I really don't feel I can be objective here because I have loved these songs for far too long, from Coffee break to Paris Original to Brotherhood of Man.

The Costumes
Mad Men on color crack for the ladies and just straight up Mad Men for the men....well...with a little added flair in bright accents, such as Radcliffe's bow tie.

The Sets
Flashy and totally retro 1960s glam-office feel.  We were all enamored with the office of J.B. Bigley on the "second floor" of the set.  His entrance was an elevated, slide-out platform on the left of the stage.  Sounds simple enough, but added that extra little flair.  The way they worked the scenes in the "elevator" also tickled us.  The only set at all I can remember thinking was a little sparse was during the song Coffee Break.  Seriously though, you 100% felt the 1960s over-exaggerated office environment.

The Choreography
The best of the shows we saw!  Even silly songs like Coffee Break were magical because of the staging, the lifts, the random body positioning...les sigh!
Is there anything out there that makes my heart flutter the way a handsome singing, dancing man does?  How about almost twenty of them?  Be still my heart.  I could have watched Brotherhood of Man over and over and over.  In fact, I may or may not have watched the video at least five times.  Grande Old Ivy stole my heart as well - Larroquette and Radcliffe were both dripping with sweat by the end of the number, with more than good reason.  See it, see it, see it!

The Actors/Actresses
Many of you out there may be speculating that Daniel Radcliffe got this role because he played Harry Potter, therefore bringing in that fan base to pay beaucoup bucks and make the show a success regardless of the quality.
I want to tell you - loudly, proudly, firmly - this is not the case.  Can Radcliffe sing?  Dance? Act? Yes, yes, YES!  And all without a trace of his accent.  Want confirmation?  I can't say enough, the video at the end of this text from a Good Morning America performance speaks for itself.  Keep in mind, even the video does not do the actual stage performance justice.
I will say that we all agreed you can tell Radcliffe is a screen actor because, through the first 2/3 of the show, his antics were not "larger than life."  By the time Brotherhood of Man hit, however, you would never guess this man hadn't been on the Broadway stage his entire life.
I was just going to write, "You know who really stole the show?"  But I can't, because they all stole the show in their own rights and at different times.  If you had to pick one  person to see this shoe for, that would have to be Larroquette.  The man can knit - seriously!  I honestly had no idea I was in for such a treat with him.  If someone else wins the Tony award for which he was nominated, I will have to see that actor because I am fully convinced no one can top this.
Rose Hemingway, in her Broadway debut, was... well... perfect.  When you know a show for years, you have pre-conceived notions of how everything should be, which can often lead you to being disgruntled with a perfectly splendid performance.  Hemingway was everything you could want and more - darling, voice to kill, looks to kill, and capable of stealing that spotlight from Radcliffe at any moment (but finding a fine balance).
Tammy Blanchard as Hedy La Rue is the Joan Holloway of the stage.  Va-va-voom!
I could so so much about so many of these actors and actresses, but, really, you just need to see them for yourselves.

My Biggest Downfall?
I have a few of things on my list here - only one in regards to the actual performance.
My Australian acquaintance pointed this out to me several times - the first act of the play was almost two hours.  This my friends, is far too long for a first act.  Not like I cared - they could have gone on all night and I would have stayed, but try to keep it to eighty minutes or less for those restless or elderly audience members.
Another - I never did believe that Finch actually loves Rosemary...but perhaps this is all part of the farce of the 1960s the script is intending.  She's happy to keep his dinner warm and has security, he has arm candy and someone to wait on him.
The theater itself is also far too small in the lobby area.  I tried to get to the restroom during intermission and, well, it took me five minutes to get out into the lobby upon which I was pushed into a wall and pinned there against some other ladies for another five minutes, trying to keep a large mirror from falling off the wall and onto the pushers.  I couldn't even begin to see where a line formed because we were motionless sardines.  I gave up and went back to my seat.  Good thing, too, because Keri and Megan (one and two rows behind me, respectively) actually found the line and missed the first five minutes of the second act.
If your favorite Broadway show is Next to Normal, then this probably isn't the show for you.  I love that show too, but what I'm saying is that if you are looking for something moving and educational, you are barking up the wrong tree here.

My Biggest Praise?
My brain is going into this tizzy of a tailspin trying to put into words all the fabulous things.  You cannot see this show without finding your cheek muscles sore at the end because you have been grinning from ear to ear for three hours.  You may even find your abs are extra firm from laughing.  This is the kind of show that will leave you wanting to immediately jump on the stage and do your own song and dance number or twirl around light posts in the rain.  The only word I can think of to describe it all is, "electric."

If this show doesn't win the Tony for Best Revival of a Musical, I will be thoroughly shocked.  I recommend this show right up there with Jersey Boys and Wicked for those venturing to NYC for the first time.

Visit msnbc.com for breaking news, world news, and news about the economy 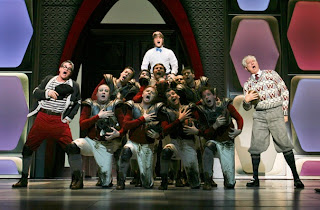 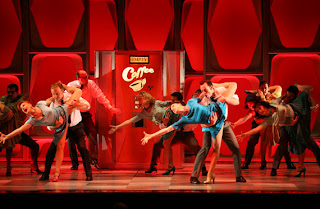 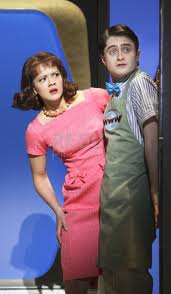 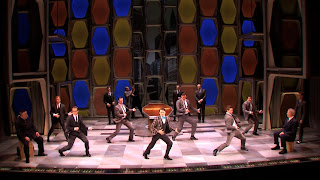 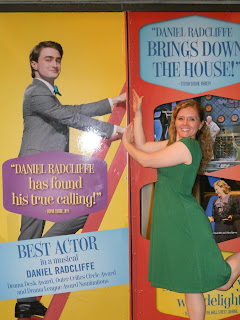 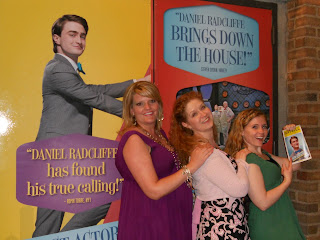 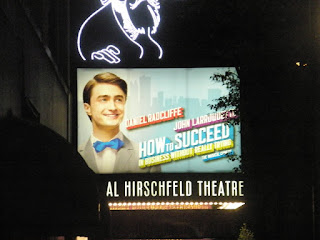 I think my favorite part is the red dress metronome.

You can consult with a business plan service. You can find your simple idea can be generated in a spectacular way. You can have a proper mapping of your business plan and execute your plans in a successive way.

You can choose any method to get your run astonishingly. There are ways to maintain the scheme. You can check out the marketing consultant near me to find out the best possible way to get your business run. You can also have an affordable charge to maintain all your things.

Amazon is a great thing for businesses. It opens up a world of possibilities for you. Many advantages and disadvantages of Amazon's business can be found. However, you can look here to see how to manage everything easily and correctly to maximize your profits. Amazon business education

Trade seal is a divider cladding line and administration entrance seal comprising of a flexible EPDM sleeve fitted with a self-cement rib.