Catch Me If You Can on Broadway 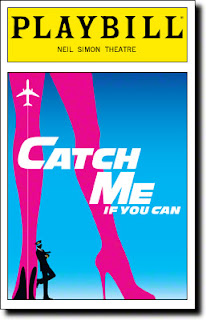 By now, we are all probably at least one-view familiar with the Tom Hanks / Leonardo DiCaprio movie, Catch Me If You Can.  Would you believe they put this on stage as a musical?  I was a bit skeptical, I have to admit, but the reviews I read were glowing and the show stars not one, not two, but five Broadway and television/film "big" stars with whom I am familiar.  If the show were bad, they may be able to attract one "star," but five?  Ticket, please!

I wish I hadn't needed such a vacation from vacation when I returned home and had had the energy to write about all of these immediately for more complete details.

The Plot
Pretty much the same as the movie. Frank Abagnale, Jr. (Aaron Tveit) begins conning around the age of 16 due to the divorce of his mother and father (Tom Wopat!!!).  The show highlights his exploits forging overdraft checks, posing as a PanAm Pilot, a doctor, and the beginnings of a lawyer.  Throughout his scheming, he is always just barely eluding Carl Hanratty (Norbert Leo Butz), based upon real life FBI agent Joe Shea.  We also see a brief romantic interlude with Brenda (Kerry Butler) that eventually lead to his capture.
What I really appreciated about this script was the one thing that Wonderland was lacking - the cheese actually added cohesion.  These actors embraced every silly joke or twisted line in a way I can only dream of.  Because, trust me, there were some crazy lines.  I'm not quite sure if it was the script ("the book" in official lingo) that made this show better than the previous, or the actors.  I'd definitely side with the scripting team, as Wonderland had some *wow* actors, but I could be wrong.  There is a fine, fine line that an actor must dance near when being punny and cheesy - one side of the line and everyone laughs right along with you, the other side and you are DOA.    They go over the top with everything in this cat and mouse game, yet...I like it.

The Music
I really enjoyed the music, especially the songs that lent themselves to big production numbers - like when Jr. meets his girlfriend's family or when Hanratty dances around like a total goof.

The Costumes
Talk about women with sexy legs!  1960s airline stewardesses had this reputation of being sex symbols and, by golly, the costuming does not disappoint.  I'm sure the hemline's are about 8 inches higher than the real deal was.  All of the outfits matched the mood of the music, the lighting, the era, and were clever enough to be "costumes" without being over-the-top.  Another thing I appreciated?  These costumes were sexy without being trashy, another fine line.

The Sets
I adored how the entire orchestra was on the actual stage.  Often times the stage would open up to this Ziegfeld era set - my first taste of this was when Abagnale, Jr. began to tell the audience something along the lines of how he is creating his own story and has his own symphony to play for him...oh man, I wish I could remember because it was actually so cute and clever that as much as I wanted to dislike this strange transition, I couldn't help but smile to myself.

The Choreography
Fun!  I loved how Norbert Leo Butz can dance around like a buffoon of a man 20 years older than he actually is who doesn't know how to dance, but Butz does know how to dance.  I've seen him in Wicked and Dirty Rotten Scoundrels.  The women had such six-pack abs it was almost distracting...there is yet a third fine line approached in this show - women who are too cut.  Only one of the women crossed the line, thank heavens, or I may just never be able to look at my own abs again.  One last thing to say: Legs, Legs, Legs!!!

The Actors/Actresses
I think I've already talked about this one too much.  I adore Tom Wopat.  My first experience in NYC lead me to the musical 42nd Street one afternoon, front row seat.  If his booming voice doesn't win your heart, his energy and kindness will.  After the musical that afternoon, I watched the orchestra until they had finished playing, and, what I saw surprised me - Tom Wopat would run down to the pit after every curtain call and conduct the orchestra for their exit number.  How awesome is that?  He was all smiles and hopping around and full of a kind of energy I only see in young boys.  He brought all of that, only channeled differently, into Catch Me If You Can.  I love him.
To quote this enamored young man from the audience behind me, "Norbert Leo Butz is a God!  Playing a character 20 years older than he is?  He's a genius!"  Seriously, you'd never believe he isn't some stifled late 50's office paper pusher.
Aaron Tveit's as the schmoozing con-artist flowed on stage like...I don't know, something that flows really well:-)  The contrast and compliment he and Butz were able to share made both of their characters work.  Each  has a polar opposite charm that attracts the audience to them and them to each other.  Tveit's also delivers one of my favorite lines.  When asked why he did one of his schemes, his response was simply, "I like girls."
Kerry Butler as Brenda was adorable, but spent most of her time off stage.  Her character was a sprightly, tiny, bubbly, hourglass, intelligent bundle of normalcy amongst all the Glamazons.  And she owned it.
The two who portrayed Brenda's parents - Carol and Roger Strong (Linda Hart and Nick Wyman) were incredible stand-out featured performers.  Linda Hart had me in stitches - her character just does all these unexpected...well...things.  You'd have to see her.  In our particular performance, there was a man in the audience laughing like a hyena.  And laughing.  And laughing.  Linda apparently couldn't hold it in because she started busting up laughing as she delivered her line, but somehow managed to work that in to her somewhat tipsy character.  Oh I loved her.

My Biggest Downfall?
Catch Me If You Can is definitely more of an adult musical.  Not in that creeper kinda way, but as in the costumes aren't crazy and there aren't colors and rainbows and lollipops everywhere.  The themes are also a bit too mature for children...even if they weren't, this isn't the eye-catching, bubble-gum pop-sound of a show for them.
Isn't it awesome that that is the worst thing I can think of and it isn't even bad?

My Biggest Praise?
The way the actors/actresses delivered the script, embracing everything about their characters and their over-the-top show.  These were not actors playing a part, these folks were the characters.  Hats off to book writer Terrence McNally, who wrote another of my favorites - Ragtime.

I admit, I was a little star-struck.  I adore some of these players and could watch them chew gum and enjoy it.  Well, maybe not.  The show really was fantastic.  I'm still a Jersey Boys girl at heart, but give Catch Me If You Can a chance if you haven't quite had your fill of the 60s.

If you'd like to read another opinion, go on over to Megan's blog for her take from the balcony that evening. 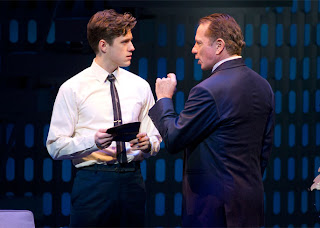 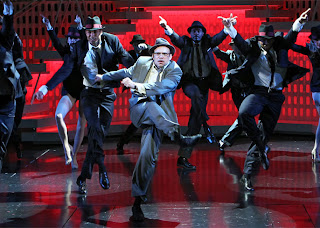 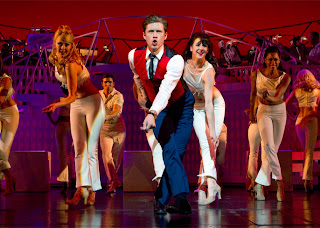 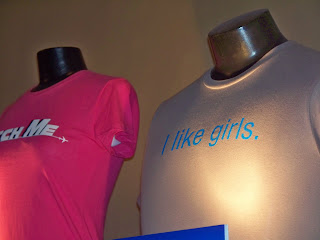 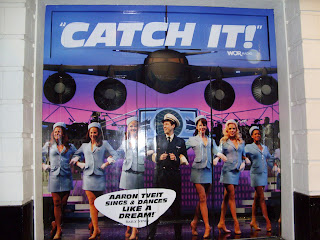 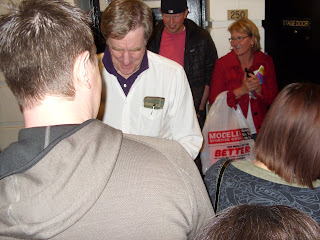 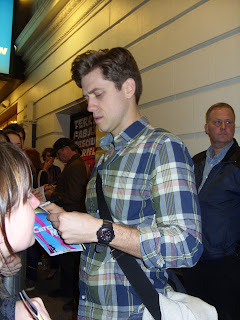 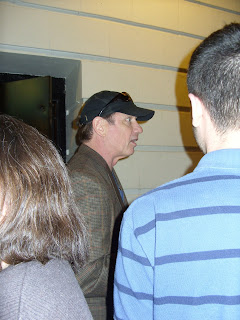 Thank for sharing, Catch Me If You Can on Broadway are legends. I cut some song to make ringtone for mobile. You can get ringtones here

Great article, thank you for sharing. You can download more free ringtones at ring320kbps.com