I know some amazing people who do some amazing things.  One of these amazing young ladies gave my information to a friend of hers and, before I knew it, *poof* I was being invited to come on the radio to be part of "Win-a-date Wednesday" with KBER Rock 101.1."

Some of you may be thinking, "Larissa, you are so not the KBER kinda girl."  Well, I actually have this as one of my car radio pre-sets and, well, their DJs are hilarious. Who would turn down a chance to see the inner workings of a radio station and meet Mick and Allen?  Not me!

What is "Win-a-date Wednesday?"  Basically, a gal comes in, they ask her questions about herself and then guys call in to be harassed interviewed to try to win a date with the lady.  The lady is actually under no obligation to call any of the contestants, which is why I was okay with the whole scheme.

I went in and pretty much made a fool of myself.  Which always makes for a better story.  Who goes into a hard rock station and, when asked about yourself, says, "I perform on stage.  Um.  I mean, musical theater."  Then they asked me to sing from "My Fair Lady."  On a ROCK station.  I respond, "Well that isn't exactly your target audience..."  Then I sing for like 8 seconds anyway.  Oy.  I did get to plug my new show for a second, that's good news.

"What age range do you prefer?  26-35?  And you are 30?  Doesn't that make you a cougar?"
"Well, actually, I looked up the definition of "cougar" last night and it is a woman in her prime dating someone at least 15 years younger, so I'm safe.  Not a cougar.  I'd have to go to the high schools to qualify."  Why?  For the love!  On public radio even!

When I wasn't busy embarrassing myself, I had a blast.  Some of the highlights:
So there you have it - my experience as a radio star for 30 minutes.  Questions? 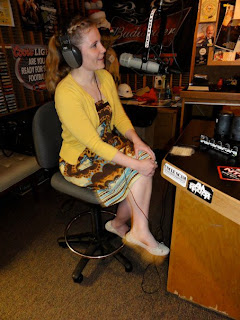 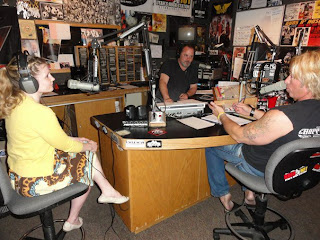 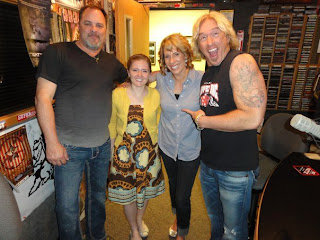 I agree, you are tiny and cute.
How fun?!