Worthless Men and the Women Who Make Them 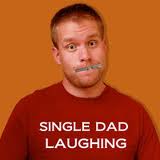 Awhile back, I read a post from "Single Dad, Laughing" regarding the way men treat women and the resulting feelings of worthlessness.

I agree with every word of his post.  Then, I couldn't help but wonder, "We are always reprimanding men for the way they treat women.  But what about the way women treat men?"

I'd like you to read these statements that we would find so appauling when referring to women, only slightly tweaked from Single Dad Laughing's originals (no plagiarism intended) to apply them towards men.

Men have too much cellulite in their bellies. Their abdomens are too flabby. Their bums are too non-existent.

Men are dumb. Men are too hormone-brained.

Men are too egoist. They are power-hungry. They are defensive.

Men don't dress well enough. They don't have clear enough complexions. They have too many scars.

Men don't have full enough lips. They don't have skin that is soft enough.

Men seem to let these words roll off their backs if they hear it, laugh about it, almost as if it is humorous, as if it is okay to be told he is never good enough.  If a woman says these things about herself, everyone immediately becomes uncomfortable, wanting to ease her pain, and most likely believes she must have been degraded by a man.  If a man says these things about himself, he's an over-emotional pansy.  Men do not say these words to themselves, yet are forced to let women say these words about them or be told he is losing his man card.

To para-quote Single Dad Laughing (my additions are in italics), "Worthless. What a concept. To hold no value. To be less desirable than a can of dirt. Are you freaking kidding me? Every single statement on this list, including the worthless comment, was a declaration that at least one woman has made to me about a man, for whatever reason. I bet there isn't a statement above that we all haven't heard at least once; most likely hundreds or thousands of times. Why would any of these horrible, degrading beliefs spill across the lips of any woman about herself or a man?"

Why is it NOT okay for a woman to say these things about herself or another woman, but perfectly acceptable for her to say them about a man?  Is it okay for our insecurities to be blamed on men for them saying these exact words about us and then justify our returning the sentiment because they made us feel bad first?

"Get real for a moment, ladies. How many of these statements have you yourself said or thought? Be honest. Go through the list, one by one, and admit to the number. I'm genuinely curious. I'm genuinely sick about it. How many of them have you said or thought just since you got out of bed this morning?" SDL said this in regards to what women think of themselves, but I believe it also applies perfectly to how some think about men.

I am upset.  I echo SDL's frustration and sadness that we constantly let ourselves degrade each other.

Women, it is our fault if we continue to live with the "eye for an eye" philosophy.  We cannot control the actions of anyone but ourselves.

Do these words effect men the same way they effect women?  I don't believe they do.  But they do set the bar, the standard of expectation.  What have we done to the men of this world?  Expecting no more of them than for them to be lazy and mistreat us?

We must not place a standard that is so low they can never hit bottom.  We must decide that men are capable and can live up to positive expectations.  No man (or woman) will ever be perfect, but doesn't everyone deserve to know that they can do something right?

I cannot sit here and say what men do or do not notice about other men or the way women treat them.  What I can say is that men deserve to be treated the same way by women that women want to be treated by men. 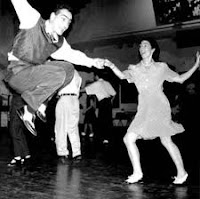 Do these things make you nervous?  Do they make you feel as if you are becoming some backwards 1950s woman if you believe them?  Tell me, what is wrong with showing respect to the gender you ultimately hope you will share your life with?

If you are told you are something over and over again, you stand a good chance of ultimately believing those things.  Let's make a stand and give these men a fighting chance to be more than what society has expected of them.  Let's make it okay for a man to be sensitive, loving, caring, ambitious, proactive, loyal, faithful, athletic, fun and all of those other attributes you know he has had inside of him since he was a young boy.

I've heard men say they feel that women are the weaker sex.  I have no grasp of how to begin to address this.  Does being sensitive make you weak?  Is that why sensitive men are not tolerated or accepted?  What is wrong with a little understanding?

We, as women, are constantly defending ourselves and feeling attacked - by society, media, men, ourselves.  Those men who have belittled us are perpetuators of our own worthless feelings.  But aren't we as guilty as they if we beat them up in return?  Is it okay just because it won't hurt their feelings as bad as it hurts ours?

Yes, I agree with SDL.  Men do have some things they need to work on.  But how can they do this with no support from our end?

SDL, are you really bashing yourself like this just after telling us women to stop the same type of behavior?

I echo Single Dad Laughing (my additions in italics), "What do you say, fellas? Can we take a step back, cordially give the media the finger, and start seeing "real" women as beautiful, just as they always have been?  And what do you say, women? Throw us a freaking bone? Give us something we can believe in?... And, never, not even once, let those self-loathing statements listed above enter your thoughts. Certainly never let them escape your lips about yourself or about men.  Let's do this already. Men, own up. It's time. Women, help us do it." 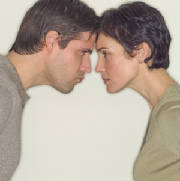 I'm sure I've opened a huge can of worms.  We must quit pointing fingers and help each other.


PS - Share this post with your friends.  Let's hear what everyone has to say.
Posted by Larissa at 12:25 PM

I agree we need to learn to love our differences and understand what makes us great. The fact that males can`t go around acting on their carnal impulses is just as well lol

Thank you for pointing that out. It's not something I think about, but it's true. I'm constantly hearing that men are terrible, worthless, etc. Where's the positive???