You all have asked for more show reviews, so here you have one.

This past Saturday evening, I had the opportunity to see the latest Empress Theatre production: Rodgers and Hammerstein's "Oklahoma!"

Most of the shows I see these days because I have a friend or two or ten to support, but I secretly love the excuse to see just about anything or something I perhaps would not have otherwise seen.  "Scarlet Pimpernel" at Hale Center Theater Orem is not a locale to which I thought I'd journey, but my friend Erica was performing and - wow - very likely my favorite local show of last year.

I find it hard to write objectively because I honestly don't care much for Rodgers and Hammerstein.  I've never even seen "Oklahoma!" until now because of this.  I only attended to support Amy, Jeremy, Rossy, and Perry.  Any show with a 16-minute "dream ballet" (two words that should never be together unless they turn "Inception" into a musical) isn't really for me. But ya know what?  This production won me over.  Maybe the best of the half dozen or so shows I've seen there.

Back to the Empress - a place I called home for about four months.

I've seen some spectacular and some not-so-spectacular performances here.  I've worried about The Empress.  This place, in the middle of nowhere (Magna, Utah), is an intimate, out-of-ordinary venue, and doesn't facilitate all the glitz and glamor a lot of folks want when they spend a little dough for a night on the town.  But the place has got heart, not to quote one of their/my recent shows.  I love the unique history of the building, the way they redecorate the entire building for each show, the friendliness of the staff, the out-of-traffic city, the small-town feel of it all.  You know The Empress is fighting for, and dedicated to everything it has and is.

"Oklahoma!" opened with this angelic voice wafting from the rafters.  "Oh what a beautiful morning" indeed.  Methinks to myself this voice sounds BYU Music Dance Theater program if I ever heard one.  A quick glance through the program confirms my suspicions about Johnny Hebda as Curly.  Not only did his voice bring a smile to my face, but his smile did also - I love when the male romantic lead of a show is aesthetically appealing.  Seems like the ladies always are, so a darling lady doesn't catch me off-guard.

Aunt Eller sat on her stool churning butter (which makes me laugh), soon enough welcoming in the enchanting April Tritchler as Laurey.  Maybe her red hair gives her a "stereotype" advantage, but she had a magnetic presence - feisty, yet gentle and somewhat naive, yet intelligent.  Hard to put my finger on, but what a fantastic, fully convincing performance.  She did sound as if she had a little cold or was simply a wee bit exhausted from "hell week," as it was opening weekend.

The show continued, and continued, and continued.  That would probably be my only complaint.  I didn't even mind the reconstruction scene-change that took 5 or so minutes in the dark (it was rather hilarious).  The show is simply too long.  But that is in no way the fault of the performers.  Ask anyone to sit still for 3+ hours and they are going to get a little restless and weary, no matter how great the production.  If the storyline were more complicated, this would be understandable, but we have the classic storyline of girl and aunt live together, boy falls for girl, bad boy employee of aunt falls for girl, boys fight, good boy wins.  Ah well.  Love conquers all, even three hours on my tuches.

My eyes widened in amazement a little as soon as the girls began singing, "Many a New Day."  I have never heard an ensemble sound so tight, so gorgeous, so harmonious at the Empress.  These ladies hands-down won me over.  The dance numbers were a little slow, but clean.  I've come to appreciate clean dancing in the community theaters around here - the kind where everyone is in sync, no one stands out, and the few more impressive moments are put together well.  I've also come to know that this is a feat not just anyone can accomplish...even just one dancer off can upset the aesthetic of the whole number.  No such occurrence here.  The two shining numbers are "The Farmer and the Cowman," and "Oklahoma."

Speaking of the cast, I wanted to mention a few others who truly impressed me.  My favorite character of the night is Ali Hakim because, let's face it, that guy makes me laugh.  Jeremy is a dear friend of mine and I don't know if I've seen him shine more.  He's definitely found comfort in his comedic chops.  He may have been able to shine so well because of the chemistry he shared with his on-stage "love interests."  Jessica, as Ado Annie, stuck the quirky antics of her character over and over again in an old-school, classic Broadway style.  Rossy (another darling friend), as Gertie, had this laugh that made me jealous.  Not because it was adorable, but because every time she laughed, the whole audience erupted.  Who wouldn't want to make people laugh like that?

"Oklahoma!" runs every Monday, Friday and Saturday through May 14th.  If you've been wondering about giving The Empress a try, go ahead and test the waters on this show.  I think you'll find yourself willing to jump in. 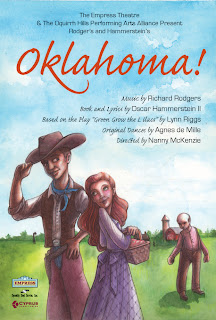 I am in the middle of a run of "Cinderella" with April Tritchler, and you're right, she is enchanting and so much fun to work with. I'm glad that you liked Oklahoma!, it's one of my favorites.