A courthouse in Iowa recently learned that the fees they paid to have a payphone available, based on the 11 times in one year the phone was actually used, cost them $69 per phone call instead of bringing in money.

Pay phones are definitely on the way out.  The reporters were discussing if they could remember when the last time they used a payphone was.  Not only could they not remember, but also I could not remember.  Then I thought if I had even seen someone using a payphone recently.

Interestingly enough, these thoughts caused me to realize that every time I have seen someone using a payphone recently, I have become suspicious of their character.  Who are these people who must use a phone that is less easy to trace?  Why don't they have a cell phone?  And why are they at this creepy gas station or standing on the corner?  What kind of shenanigans are they involved with?  I then guard my purse with extra caution.  How ironic that something that was once so normal is now indicative of a someone of whom to be leery. 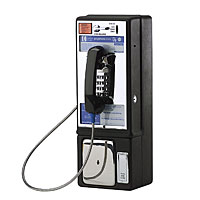 Hang out in Harlem and you'll see plenty of people use pay phones. In NYC they use pay phones and pay for things in cash...it's like they're stuck in the 1970s.