I was at a blogger's block, so sorted through some ancient drafts of blogs I never published and found this outdated gem, that is definitely indicative of some meany-pants-wearage on my part.

I may or may not have once told a man, "There are a few guys who would give their left nut to be with me and I pick the one who could care less."   (Who says that?!)

And I'm not the slightest bit regretful. I feel mean, but I feel it was called for.  And you can't argue with feelings:-) 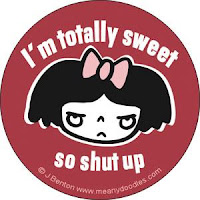 LOVE it. LOVE you!

I will tell you who says that, someone who is freaking awesome!