The week before a show opens, the cast and director get all sorts of technical about each scene - wanting to make sure that each little movement works.

We re-worked a scene for 45 minutes one Friday night and finally resolved that our positively brilliant director would make some written notes for us the following rehearsal.

Upon reaching the scene the next rehearsal, we began the new blocking and stopped when we no longer knew the new direction.  The director pipes up, "What are you guys doing?  What are you talking about?"

Would you believe we worked a scene for 45 minutes and he had absolutely zero recollection of the event?  He thought we were pulling one over on him and took some convincing to finally believe us.

Seriously one of the funniest things I've experienced in theater thus far. 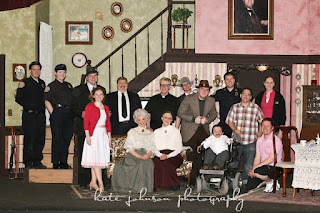