I couldn't help but feel this overwhelming sense of satisfaction while movin' as much as my limited little seat area would allow me.  Bon Jovi doesn't need gimmicks, in fact the LCD displays were a little cheesy at times.  All they need are their instruments and voices - this band knows how to entertain, the music is in their souls.  During, "The More Things Change, the More They Stay the Same," he talked about how the world has changed these past 27 years, but that one thing has lasted and they were all up there on that stage.

What made the night even more awesome?  My darling Keri Peshell Wright, a fellow Jovi-lover, accompanied me.  She's in an awesome 80s cover band, so you really can't go wrong with the combo of her and Bon Jovi:-)  As the concert wound down, I turned to Keri and said, "They haven't done 'Livin' on a Prayer!' I will not feel fulfilled unless I hear that song!"  She pointed out they hadn't performed "Dead or Alive" either.  Wouldn't you know it that their encore was three songs - two of which were the aforementioned.

There was no better way to conclude the evening that I have waited 13 years for than rockin' out to "Livin' on a Prayer."  I can now cross Bon Jovi off my bucket list.  Although I may have to add, "Stare at him at least once per day."  Roar.  If you ever have the chance to see him perform live, you need to.  Jon Bon Jovi, my friends, is what it's all about. 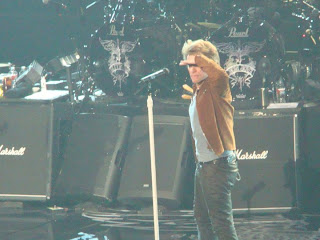 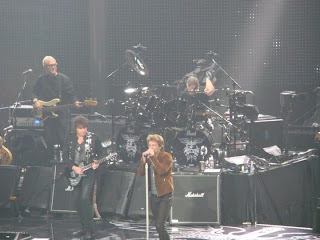 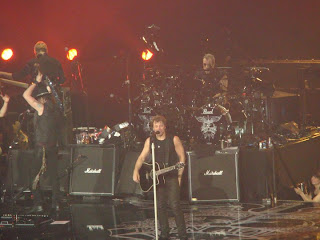 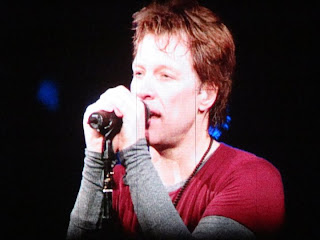 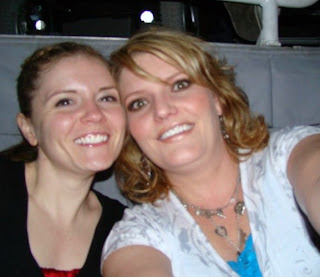