I couldn't be more excited that I was able to attend the very first performance of a Broadway show, let alone the biggest budget Broadway show in history.

Every time someone asked what shows I was going to see on my trip and I responded with, "Spiderman the musical," their reaction always included a laugh and an expression of bewilderment. None of them had high expectations but they all completely understood how curiosity got the better of me. 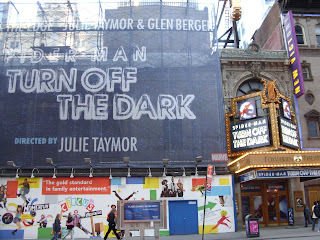 But I'm no dummy - Bono, the Edge, Julie Taymor - all involved in the same production? Sign me up. Delaying the opening three different times because the effects are so spectacular they need more time to get the permits and technology? Double sign me up.

My sister and I have seen the sign on the Foxwoods Theater there taunting us for over a year. 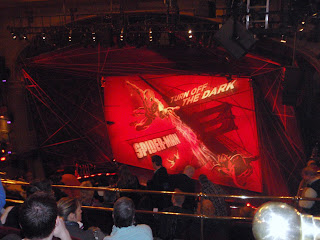 When we arrived at the theater, we had to walk to the end of the line - a good two minutes away from the theater entrance. There were people walking around asking for tickets to this sold-out show and a line-up of people just hoping to snatch up the seats of the no-shows.

We stood in line with the nicest man and his three children, the youngest of whom was the most spitfire, witty little boy I've ever met. He had us in stitches the whole time. They also knew someone who was part of the show and had tickets in row A of the Orchestra. I'm still jealous.

Once we finally got into the theater, I could hardly wait to check out the remodels, as I'd heard of all of the construction they'd done since the days I saw 42nd Street there. Suspicion confirmed - new rigging's lights, platforms, wires, poles - the whole kit and caboodle.

Our tickets stated 6:30pm as the start time, however the doors didn't open until 6:30 or later, so clearly the show began somewhere around 7pm.

The producer came out and shared with us that the evening would be long and would include a few stops along the way to fix some technical glitches. The audience cheered - no one seemed to care, we just wanted to be there.

I could give a full summary of the show, but being as this is quite long as it is, I suggest looking that up elsewhere. The New York Post has a review that is pretty accurate, albeit not pointing out many positives.  You can also watch the 60 minutes segment.

What did I think of the show?

The plot? I still can't quite figure out exactly what the plot was. My sister and I didn't catch on until about 3/4 the way through. In fact, I'm a bright girl, but I entirely missed the fact that Arachne was the actual spider who bit Spidey - I thought she was just the goddess of spiders and was upset Spidey rejected his spider gift. Oops.

The characters? Arachne, Julie Taymor's creation, is stunning visually, from her first appearance as a beauty to her emergence as a spider in all forms. She dangles above the stage as her legs begin to "hatch" from behind her. Super creepy. At one point, there was a technical malfunction as she dangled there - holding her pose - for about ten minutes. I'm impressed with this actress's arm strength. Arachne's minions, later in the show, had this odd, undeniably fascinating dance number about shoes, each of the performers having eight human legs. I could not tear my eyes away to even blink, it seemed.
Then there were the annoying narrators/"story writers." These four "teens" were more talented than I can ever hope to be, however their characters made no sense. They need to go...or be integrated into the plot as story tellers of the story currently happening - not as kids actually writing the story. This added to the plot confusion way too much, however, without them we would have about an hour of just Arachne (she's seriously too much of the show).
The rest of the lot - the Daily Bugle characters, Green Goblin (oh how I wish Alan Cummings were still in the show...), Spidey, Mary Jane, the other villains - all the tops - definitely keepers.

The singing? All were immense talents and beautiful gifts to my ears. The songs, however, were not memorable. I can hear Arachne's voice in my head, but can't recall a single "ear worm" aka "hook" from the melodies of the show. Wait...the weird eight-legged shoes song I can. How is that the most memorable musically memorable moment of the show when it made absolutely no sense with the plot that already made no sense?

The costumes? H-o-l-y C-o-w. Forget CGI, just have these costumers come work with your productions. Words cannot describe the splendor - you might as well lump this in with the effects category.

The sets? WOW. I couldn't find many photos online, and we aren't permitted to take photos during the show, so the below is what you get, which doesn't even cover the half of it. Let's just say there is a point where a building comes up and turns over. You, as the audience, feel like you are at the top of the building looking down on the street - even seeing cars driving by. Whoa. There were also quite a few "comic book-y" parts of the set that looked a little "cheap," but only due to the cartoony nature in comparison with the other, more elaborate set pieces.  Given the genre, I felt it fit in quite well - always reminding us this is a comic book show. 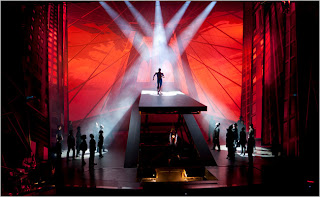 The choreography? I mentioned the eight-legged number twice already - can't get that out of my head. I l-o-v-e-d this number where a dozen Spidey's were on stage all moving exactly how Spidey would, all very athletic and unmatched levels of precision. All of the dance numbers were grand, well-choreographed, and entertaining. The opening actually has women swinging back and forth from the air, weaving an intricate web out of a chiffon like material as they swing - I'm sure very Cirque Du Soleil - and majestic.

The stunts? Jaw dropping. As if Spider-man flying around isn't enough, they managed to rig the wiring so it looks like he is swinging on webbing from his hands. The biggest breath-taking moment, however, was when Spidey and Green Goblin are fighting swinging over the audience from rafter to rafter. Spidey then actually boards Green Goblin's back and rides/surfs him through the theater air, concluding with a landing on the top level of the balcony. The entire audience sat on the edges of their seats in disbelief. I also loved when Spidey flew from the stage to the balcony and did a flip before landing. Arachne descends from the balcony once, as well. The producer was required to announce before every show, to get their permits for the flying stunts, that audience members not try to hitch a ride with performers.

Lighting? Mysterious. Good use of colors and shadowing. Nothing out-of-this-world spectacular, but no complaints. In fact, I'm almost positive following all the flying is a mountain-moving experience in and of itself, so I take my previous statement back - spectacular.

Our conclusion? The plot and music really are such a shame, because those are the two things that typically make or break a show. Who ever heard of a show failing because the lighting wasn't top-notch? If they can even just improve the plot flow, it will make a world of a difference. I want to see this show succeed, as I believe the other aspects are a gift to Broadway audiences, but if the production team don't make some changes, this show will flop after the initial six months of curiosity passes.

The show is not ready to officially open, but we would have rather been there and seen what we saw with the preview performance than to have the show delayed yet again. I've seen over 80 Broadway productions and this one is the only one I would recommend purely for the spectacle - I usually cannot forgive a lack of intelligible plot or song hook.  We are very grateful we had the opportunity to see this spectacle of a production. Not the best plot (still not quite sure what the plot is), not the most memorable music, but you will never forget the sets, costuming, lighting, stunts, and experience. That Sunday night I felt blessed to be one of a few hundred people in the world who have shared the Spider-man: Turn Off the Dark experience - that's what it is - not a show, an experience.

Definitely worth seeing for the moments that will take your breath away.
(if you can ignore the fact you have no idea what is really going on or why certain musical numbers exist and without a melody)

(We saw Sarah Jessica Parker there!)

You know, Waterworld was the most expensive production at the time it came out, too...

Watching Spider-man surf the Green Goblin over the audience and land in the balcony is a bit more exciting than WaterWorld...

I have been waiting all week for this post! :) Thanks!

I really really want to see this show. I never expected the music to be all that memorable. Shame about the plot - hopefully my comic book mind will have an easier time wrapping itself around it. Because I definitely want to see it! I may plan a trip just for that reason.