I just returned from my second adventure to New York City to celebrate Thanksgiving and ring in the Christmas season.

Thanksgiving morn, I checked into the hotel and headed straight away to Central Park West and 66th to watch the Macy's parade. At first my view wasn't prime, but about half way through, the gentle cops let me into a private viewing area - three cheers for cops! I took pictures of every float and balloon I could see. I've added a few here for you - Kanye, Buzz, Jessica Simpson, Smurf, Joan Rivers, and Santa (the most important). 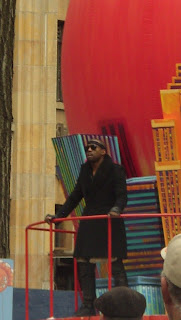 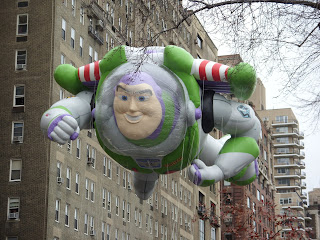 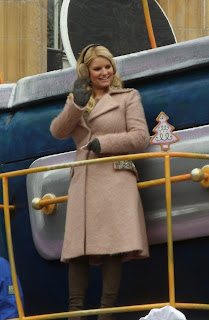 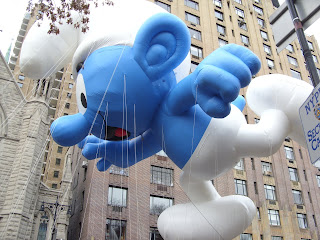 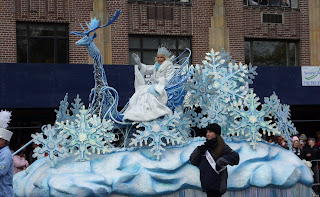 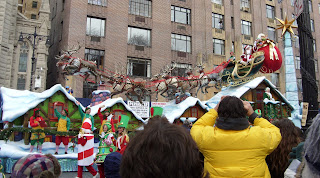 You can't escape a trip to New York at Christmas without the obligatory photo of Radio City Music Hall - home of the Rockettes. Just around the corner is the Rockefellar Center tree, but we left about 30 hours before the official lighting, so those pictures are kinda boring. 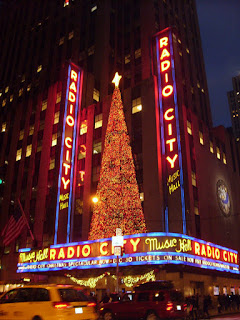 One of my favorite NYC meals is white pizza - hands down top five. 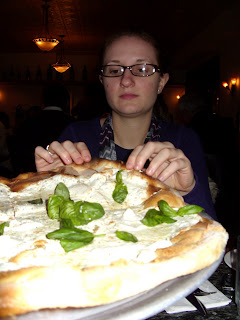 We stopped by FAO Schwartz just to see if there was a "Big Piano" show going on, but we found Santa instead. Looks like I made the naughty list this year;-) 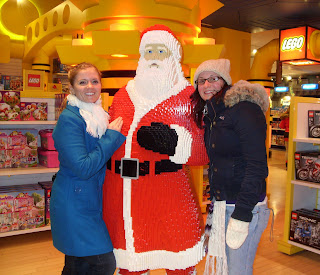 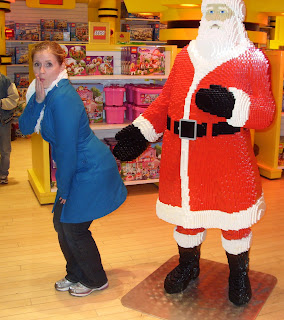 I never have my picture taken in Times Square because it seems so cliche, but I figured after making it through Black Friday alive, and with a full shopping bag in tow, I deserved a celebratory cliche photo. 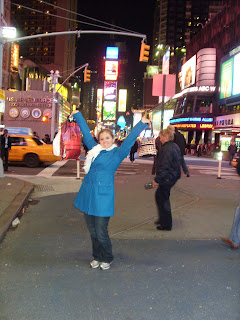 Britty and I decided to go visit the real Santa at Macy's again this year. We told him what we wanted last year and all our dreams came true. Why not give it another go? We love the winter wonderland you travel through to meet him. 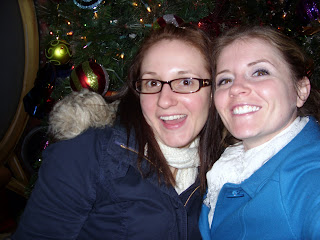 On our descent from Santa's house, we took this photo so I could post it and show you all those people. Yeah, there were easily three times that many people the day before. Don't try Macy's the day after Thanksgiving. Ever. 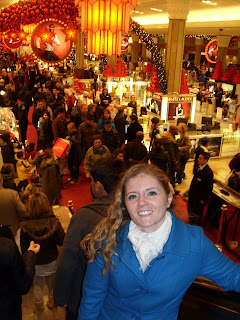 The thought just occurred to me that I could have been wearing the same outfit the entire trip and you would never know what was under that coat. Regardless, the morning of our departure day, we went for the most amazing, peaceful walk along the East Side of the island near our hotel to see the Statue of Liberty for my sis. You can see from the sun and my squinty face how beautiful of a day the sun kissed us with. 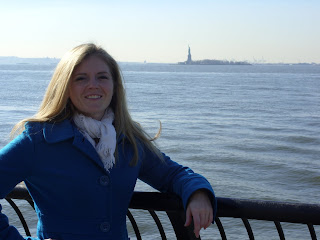 If you want to see more photos, you'll have to check out my Facebook page. My sister also took just as many photos, but we divided up the task, so we don't have any duplicate pictures. I can't wait to see them.

What else did we do in NYC?

We saw the first ever performance of Spider-Man: Turn Off the Dark. I am going to dedicate an entire entry to that experience alone. How many times in your life can you say you saw the first production of the biggest budget Broadway show in history? Oh yeah...pretty much never. We were very blessed and fortunate.

I also saw Elf - The Musical, Memphis, and Next to Normal. I can't begin to tell you what a life-changing experience Next to Normal is - if you ever have the chance to see it, you must. No arguments. Memphis is a Broadway spectacular if I've ever seen one - I left saying, "Now that is a Broadway show." Elf? Cute, darling, colorful, gorgeous sets, energetic dances, great for children, but nothing worth screaming about - the movie is just too good to speed up to fit in musical numbers.

One unique experience we had this trip was meeting up with my friend Clint. He drove into the city and escorted us around all evening. We visited a Christmas market in Union Square, sampled truffles, crepes, pretzels, and organic hot chocolate, visited the Met (first time for Brit!), ate Thai food, walked around Rockefellar Center, and topped the evening off with Magnolia cupcakes and door-step service to our hotel. Shout-out to Clint - thanks for the magical evening!

Other things? Shake Shack! Chinatown, the new Disney Store on Times Square (extremely disappointing compared to the old 5th Avenue location), Central Park, the Christmas star light show at Columbus Circle (magical, calming, see it...late at night), Pier 17, Max Brenner's Chocolate by the Bald Man, Serendipity, World Trade Center area (where our hotel was), walked by the Ray's Pizza that is the original according to Santa in Elf, and stayed up late chitter chattering. The trip was fantastic. If you've never been to NYC, stop making excuses and just go. I'm in love.

Seriously, you felt like you had to snap a picture of Kanye? Man...

Sounds like an uber fun trip! I agree, Next to Normal was an intense and awesome musical. A lot of thought provoking thoughts came from it.

Can't wait to hear all the details on Spider-man!

And I LOVE that blue coat!

so excited to see you in 1940s Radio Hour

Sounds just as awesome as ever! I'm excited to hear what you have to say about Spiderman. I was so mad that we couldn't see it when we went to NYC in March.

In winter, the region gets on normal 409" of snow, which makes Tahoe one of the best skiing destinations in America. The region incorporates 15 downhill hotels, 10 cross-country ski focuses, and offices for snowboarding, ice skating, snowshoeing, snowmobiling, sledding, sleigh riding, and playing in the snow. Tahoe water sports