A fun little article on my show is here. 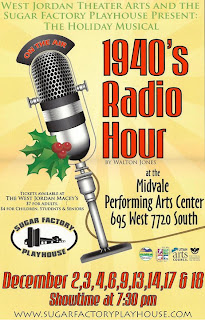 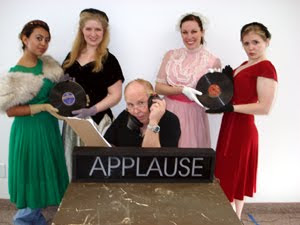 I don't know why no one can ever spell my name right.

But in the caption for the picture, our names aren't even right - funny stuff! I hear in the print version, the names under the photo don't even match ours. I guess I'll go by "Shyanne Williams" from now on, since that's what they named me:-)

West Jordan Theater Arts' Holiday Show takes you back in time. The year is 1942 in New York City and radio station WOV is presenting its Christmas show, the "1940's Radio Hour." In a time period when radio was the lifeline to news and entertainment, everyone gathered around the radio.

Come watch and enjoy wonderful music like "Boogie Woogie Bugle Boy," "Baby, It's Cold Outside," "I'll Be Home for Christmas," "Have Yourself a Merry Little Christmas," "Rudolph the Red-Nosed Reindeer" and more. See Johnny Cantone the Frank Sinatra wannabe, and Biff doing his last show before he is sent overseas to join a fighter squadron. See Neal the comedian, waiting for his big break. You'll hear from BJ, Ann, Ginger, Geneva, and Connie (an 18-year old bobby sockser from Ogden who wants to be a star). Pops, Lou, Clifton, Wally the drug store delivery boy and other great characters fill out the radio station staff.

Dave Newton has built an amazing set, and director Rosalie Richards and music director Harli Zaugg have brought the 1940's back to life. Music is provided by Cheryl Neilson and Ralph Faneus, and production assistance provided by Jen Crabb and Pat Oliver.

Break a leg! Looking forward to the show!

This is the most popular ringtone in 2018, you can install it for free by following the instructions below:

Your phone needs a new ringtone. Wish you have the best ringtone selection. Thanks for care!

You can listen free Firestone marimba ringtone online or download the tune and put on a call for your phone.