Plug for my ginormous (guest list over 40!) "5th Annual A Christmas Story Pajama Party" tomorrow night (Saturday December 10) at Jacob's! (it was at Dallas's but due to an emergency situation, we've had to have a change in venue - please send some good vibes out to Dallas and his fam) Ample food and sugar comas for all - text or call if you didn't get the Facebook event invite or evite and want to come.

Back to business.  I've seen five shows that I have neglected to review, two of which I promised I'd write about.  Thus, I give you my quick thoughts on each of the shows in a very non-review format.  Enjoy!

Sleepy Hollow at Centerpoint Legacy Theatre
You probably all remember my long, overdrawn account of auditioning for this show.  I am glad to report that it was everything I expected and all of the young ladies who played the parts performed to a much greater caliber than I could have.  Have I mentioned I still can't sing to my full extent?
One of my besties, Megan, decided to treat me to this show for my birthday!  I love Megan dates!
The well-known classic story is twisted in a way that ads intrigue and more excitement.  A few tweaks need to be made, abundant ballads always slow shows down to me, but this is well on it's way to being a Halloween classic all over the nation.  I wanted to see the show again, but it was closing week.  If you ever get the opportunity to see a production of this, I'd take it.
The part that touched my heart the most was when a mother sang a song about her missing children - I don't think there was a dry eye in the audience (except mine, as my comfort level with crying is sub par). 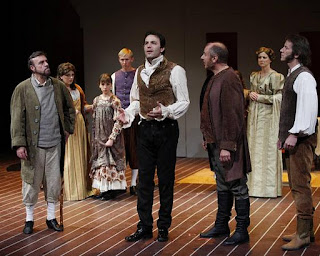 The Masque of Beauty and the Beast at Salt Lake City's Children's Theatre
My darling Megan performed the role of an evil stepsister in this production, so naturally I saw her twice:-)  You may be confused by the mention of a stepsister in Beauty and the Beast.  This production is actually based upon the original, non-Disney story and is all in poetic verse and without song.  I'd never been to The Children's Theatre before and found the way they stage their shows (audience on three sides) and the animation with which the actors need to perform, quite well-done.  Although not as aesthetically stimulating as Disney has brought us to expect from Beauty, there was much charm and talent and the little girls went crazy for it.  I finally got to see a darker side of Megan of which I thought the existence was impossible and I couldn't have been more proud of her!  She is an actress indeed. 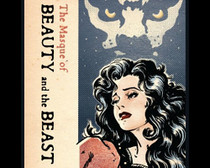 A Christmas Carol at Centerpoint Legacy Theatre
I have to start with the disclaimer that I am not a huge fan of the whole Scrooge story.  I know, I know, this makes me entirely uncultured.  It's just overdone.  I mean, c'mon, there are many other Christmas stories aside from A Christmas Carol and yet the two largest theaters in the Salt Lake area do the show every single year.
That being said, Centerpoint Legacy chooses to perform the more entertaining, less traditional "Madison Square Garden" version of the show - complete with cabaret dancers (hopefully Dickens doesn't role over in his grave).  Children and families will love this show. The sets provided a new world to look at - at one point a two-story tall chair rises out of the floor in full decorative glory.  Then, the character atop the chair slides down a pole like a fireman - such fun!  One or two of the lead characters left some skill to be desired, but I'm guessing there was illness at play with at least one of them.  Dave Hill, as Scrooge, has me completely in awe - I will see any show he is a part of any moment any day.  The man is phenomenally talented and embodies the character.  The cast was almost an entire city's worth of people, with action happening in every corner.  Sometimes this made me feel a little chaotic, but overall I feel that audiences will enjoy this show and all the holiday spirit that comes with it.
You can buy tickets here through December 22. 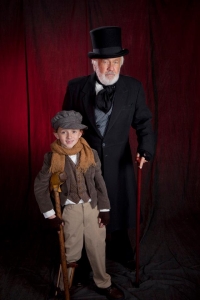 Scrooge at The Empress Theatre
I love Dennis Larsen!  He plays the character of Bob Cratchit with such sweetness and sincerity, you cannot help but fall absolutely in love with him.  With Tiny Tim upon his shoulders, he sings "Christmas Children" with all the velvet softness for which the crooners of old have set the standard.
His counterpart playing Scrooge is also of noteable talent and earned his part well.
Now, the show itself is a little slow because of too many slow ballads, but the performers themselves do some fine work on that little Empress stage.  You'll be humming the tune to "Thank You Very Much" all the way home.
You can still buy tickets here through December 19th here.  Do it fast, one night is already sold out. 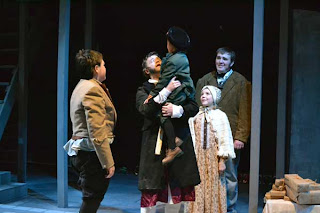 White Christmas at BYU
My favorite!!!
I loved this show!  This performance, in particular, was outstanding without a weak link amongst all the performers.
I saw White Christmas two years ago for the first time on stage on Thanksgiving Day at the Marquis Theater in New York City.  What a way to bring in the Christmas season, amiright?  As if Santa waving at me at the end of the Macy's Parade wasn't enough.
Last year, I saw this show at Pioneer Theatre in Salt Lake and I fully expected BYU's production to be at the bottom of the White Christmas trifecta.  Not so.  BYU's production was most definitely better than Pioneer's, save for a few obvious budget differences in sets.
The talent, the costumes, the colors, the warmth, the ambiance, the dancing(!!!) - I just can't rave enough.  I wanted to see the show again (and again and again...)  I knew they'd extended the run.  Sold out.  Every performance.  It was (closed last night) that good.
I'd tell you my favorite part, but that was pretty much the entire show. 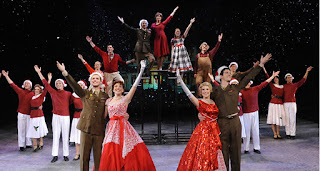 In the next week, I have plans to see Candlelight Christmas at This is the Place, Oliver at the Dicken's Festival, and the Mormon Tabernacle Choir Christmas Concert with Jane Seymour and Nathan Gunn.
Posted by Larissa at 3:36 PM

My little Alina is Jen in "Scrooge". Just thought I'd brag for a bit :)

1. I love Larissa dates!
2. Thank you for your kind words; I was thrilled to have you at my play, and CAN'T WAIT until the next time we can share the stage again!
3. I am beyond jealous you get to see the MoTab show. Definitely let me know what you think!