Employee of the Year!

I don't talk about work much.

In my life, there is a need to keep a divide between work life and personal life.  Work is busy, stressful, chaotic, and fulfilling, and I'm the type of personality who will not be able to stop working unless I force separation.  Sometimes, I tell friends how busy I am and I think a couple of them think I am fibbing because I'm so happy and bubbly and carefree outside of work.  I mean, how is a person like that so nose-to-the-grindstone professionally?

Every year, my company of about 80 internal employees and 20ish remote, does a little Christmas potluck where we eat, play games, and get a little envelope with some Christmas cash.  This year, in our November company meeting, our CEO announced that we would be doing an "employee of the year" award for the first time, awarding the winner an iPad2 3G.  My company has a remarkable ability to run at maximum output with a minimal amount of employees - every single person at this company is above and beyond average.  In spite of much office chatter, no one had a clue who the winner would be.

Friday was our holiday party.  We began by playing a game where you had to guess Christmas songs based on strange titles, "I am pontificating of a colorless holiday" would be, "I'm Dreaming of a White Christmas."  English minor that I am, I rocked it - winning a back massage thing.  Next, we played a game where you fold a piece of paper in half behind your back and try to rip out a Christmas tree.  As terribly non-crafty as I am, I rocked that one too and ended up with a holiday mug full of taffy.

When all was said and done, our second-in-command began sharing with us the details of "Employee of the Year" on behalf of the CEO.  He shared that the CEO feels several people in the office are deserving of the accolades, therefore, we had a list of finalists.  For each of the seven names that were announced, I thought, "Wow.  Definitely!  That person does so much with this company!"  He shared the final nominee, "And for her work with our webinars, and for making the product blossom with tremendous growth and success, Larissa Villers."  Can we talk about how excited I was just to have my name on that list?!  I was grinning ear-to-ear as the blood rushed to my cheeks.  I sat back to relax after that because I thought the fact that my name was even on the final list was the best award ever.

He was holding a blue Tiffany box for our runner up.  I hooted and hollered for her, making note to stalk her and gush over her necklace.

"And our Employee of the Year is Larissa Villers."

I never saw that coming.  Not a million miles away.  Every single person in our company works their tails off and anyone could have been awarded this honor and deserved it.  I work quietly in my corner, running my events, making them successful financially, educationally, customer service-wise, etc.  Everything typically runs so smoothly, I figured I mostly go unnoticed.  I was wrong.  Sometimes, I really enjoy being wrong.

I'm still floating around on cloud nine.  Saturday I upgraded the iPad from 16GB to 32GB and my Apple nerd friend (shout out to Dallas!) has been helping me with all the set up and functionality.

I am so excited, humbled, legitimized, and appreciative.  Folks, hard work pays off! 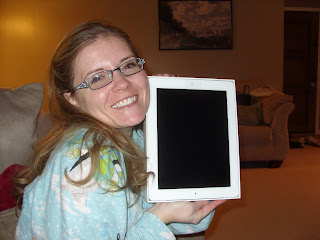 Email ThisBlogThis!Share to TwitterShare to FacebookShare to Pinterest
Labels: Award, Employee of the Year, Happiness, Professional

This is awesome! Congrats!