Once upon a time, I called my father to hear the words, "Larissa, you are overreacting and demanding and expecting too much.  These young men are just that, young, and they do not have almost 40 years of marriage under their belts, don't expect them to act as such."

Dad actually only told me that once, as he is a huge advocate of me learning my own lessons, but I was fishing to hear it again.

I rarely, rarely, rarely talk about my dating life with my family.  My mother starts worrying the second I tell her I'm dating someone, although that may be warranted because I had a stretch of about 4 boyfriends with whom my relationship ended within a week of me telling my mother I had one.  Regardless, I stopped discussing the details with them a long time ago because it isn't worth the heartache.  They don't ask because, well, they watched me go through a lot and know I will come to them if I need them.

Daddy-o listened patiently for a good ten minutes for me to take a breath.  And I then heard something I never expected.

"Well that is just totally unacceptable."

"Riss, think about it.  The guy is saying, 'That's just how I am' and not even trying to change this thing that will impact every time-based decision you ever make for your entire lives.  This is not a good trait.  This is something he actually should try to change.  Especially because he knows how much it bothers you and that you do have anxiety about lateness.  What this shows to me is, 'I don't care about your feelings nor do I respect you enough to be considerate of your time.'   This is pure selfishness.  Think about it.  Every time you have to decide when to wake up, when to eat, when to go visit a friend, when to go to work, when to go to a show, when to go to the gym, when to cook, when to clean, when to be at the airport, when to go to bed...anything...every time you do these things for the rest of your life, this man will be late.  In my mind, that is a deal breaker and totally unacceptable."

Wow.  And here I was thinking how irrational I had been.  It's nice when we think we are wrong and our mentors let us know otherwise.

Moral of the story? 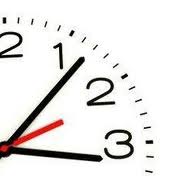 * In the case that the aforementioned young man reads this post, he knows I adore him and value him and think he's about as sweet as sugar.  Simply due to my lateness neurotic ism and a combination of some other things, a relationship between us would not have worked at that time, but he is a gem and highly recommended, ladies, if you want the hook ups:-)

I'm pretty sure I told someone that yesterday.

Sometimes it has nothing to do with selfishness, though. It's just really bad time management. Time management is a skill that has to be developed, and some people just aren't very good at it.

If he's not trying at all, I agree, it's unacceptable. If he's doing it because he knows you'll wait around for him forever, and he is really not taking into stock your feelings, then yes, it's selfish.

But sometimes it is just a flaw. One that can maybe be helped and honed.

The lack of penance regarding the inability to manage time or respect your time is a red flag. Kudos to your dad for pointing it out! The abilities to listen to your concerns and reach a compromise are important ones in marriage - and not ones that can be learned by one who considers his current state a character trait.

"That's just how I am" is a cop-out. You are not being unreasonable at all.
It would be different if he was sincerely trying and you were cutting him no slack-then you would be being irrational.
But the fact he's not even willing to try to work on this simple thing makes me worry what will happen with the bigger, more important changes to make down the road. Cut bait my friend. It's not worth the hassle.

This one was awhile ago, but I love the lessons Daddy-o has taught me and thought I'd share. Bait was cut.

That is interesting. I really worry because I have a hard time keeping a room clean. I really do try and I DO want a clean house, but it is something I am constantly struggling with. Anyway, yeah. Good lesson learned.

I agree with your dad! I can't stand being made to wait for other people! My band practice is supposed to start around 8:00, but the drummer and guitar player usually have other obligations, that make it so they can't be there until 8:30. I have come to accept this, and have now started showing up at 8:30.

However, last night the guitar player didn't show up ready to play until 9:20!! Then, instead of getting right down to business, he started playing "Sweet Home Alabama" (which is NOT on our playlist). I was SOOO irritated! It's just plain RUDE, and shows that the person has ZERO consideration for other people's time!!