All Shook Up: The Lurker

Apparently we have a super fan of our production.  Well, not necessarily that, but there was a creepy guy whom we couldn't seem to keep out of the rehearsal theater.  He was ushered out five times and he eventually had to have the police called on him to keep him away.  We were all so absorbed in rehearsal, we did not notice, save for our awesome music cue guy and super protective choreographer.  Thank heavens.

The next morning, I returned from the gym to find the screen door on my balcony wide open.  Panic attack, much?  Ends up my little poofy princess has learned a new trick.  I believe a strategically placed pillow will prevent her handiwork and allow me to keep the circulation flowing until I must turn on the AC.   (hasn't reached above 70 in my apartment yet this year!) 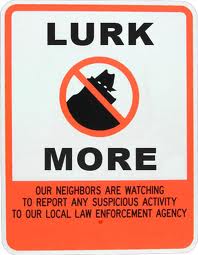 What the WHAT?! This is brand new information!

Scary! Someone needs to tell Creeper McCreeperson to stay away!

If he comes back I think you should all choreograph a swift kick where it counts!

I'm glad Stephanie has been looking out for you all. Creeeeeepy!