I have made many a dear, life-long friend in my three-year foray into theater in the Salt Lake Valley.  Yet, I can't help but feel as if I am not a stereotypical theater person and the folks I have befriended are mostly not either.  Theater enriches my life immensely, but most of my theater friends and I very clearly know there is life beyond it.  In fact, I've been told several times, "You do theater?  You don't seem like a theater person..."

A little Google research shows me that the world personifies a theater person as someone who wears a lot of black, drinks a lot of coffee, and is self-absorbed.

In my own opinion, the stereotypical Utah theater people are different, mainly because black and coffee aren't mainstream around here:

One stereotypical trap I do fall into is that sometimes I don't feel as if I am accomplishing anything or have much of a purpose if I'm not in a show.  But right now?  I feel rather content with life off stage.  I love having time to read, watch some "Pushing Daisies," play ultimate frisbee, concentrate on my workouts, attend parties, go on dates without having to plan two weeks in advance, help friends who need me, relax by the pool, go to the grocery store without moving at the speed of lightning, plan trips, indulge my kitty's fantasies of life on the balcony, and the list goes on, you get the point.  I do miss not having that extra motivation to not eat that Snickers bar, however:-)

I love to perform.  I love seeing the juxtaposition of normal life versus performing life.  I love having someone to geek out with about all areas of life from theater to Gym to traveling.

When you think about it, I guess we are all actors - acting appropriately for whatever the situation calls for.

Ah, who am I kidding?  I'm trying too hard not to offend someone here.  What I really mean is this:

Theater people are freaks. (And sometimes I'm one of them) 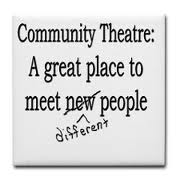 I say let your freak flag fly!! But amen on the drama. Less of it in life, more of it on stage!