Hey, Everyone!  I'm one digit richer!

And I have a confession.  An embarrassing one.

Yesterday, I cancelled my birthday celebrations for tonight.  Don't worry, less than three hours later I reinstated the plans.

You may be wondering, "But, Larissa, what sort of crazies would grip a person's mind and make them do this?"

What luck if you are - I have an answer!

First of all, let me state how awkward it is to throw your own birthday party.  "Hey, Everyone!  I'm awesome!  Come celebrate me!  Hosted by me!"  Feels strange, right?

Second, of the forty or so invited, only four people responded positively.  I began to feel I was merely burdening everyone with yet *another* birthday thing they felt obligated to attend.  I can relate, I'm a little burned out with the seven (or is it eight?) birthday parties I've attended in the first eighteen days of the month, but I love my friends and feel incredibly guilty about the ones I miss (sorry, Toni!).  I also began to feel unimportant as some of the excuses were trivial.  "Oh, yes, walking your chinchilla is more important than me."

Third, I thought back on the past couple of years about what a horrible friend I've been.  I had this sinking feeling that I've been such a terrible friend that maybe no one really cares any more.  Dumb, I know.  I do all I can, and I know my besties know this, but I also let guilt eat away at my conscience.  I just used to...I used to be the person whose parties no one would dare miss.  I would throw parties so crowded you'd have to crawl over people to get anywhere and you were jammed in like sardines.  I'd buy a dozen pizzas and bake dozens of cookies and not a crumb would be remaining.  And then I started performing again and gradually they've all fallen to the wayside.

After I cancelled, I received at least a dozen e-mails from people (most from people who can't come) who were determined that I needed to celebrate even though hardly anyone can be there.  So, of the handful of people who can show up, doggone it, it'll be the best party ever.  Party of five!  Or more, perhaps?

A few die-hards have even committed to indulging my stupid shark movie fantasies with a post-party rendezvous to "Shark Night 3-D."

Happy Birthday to me!  Maybe this year I'll actually grow up:-) 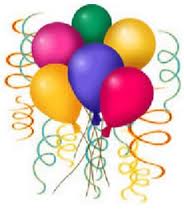 Ah! I know what you mean. But as adults, I think that if we want our birthdays to be celebrated (and we SHOULD!) then we have to take the celebrations into our own hands.

I hate people who don't RSVP.

Happy Birthday! Live it up!