I hate jewelry commercials.  With a passion.  Probably as passionately as those ladies in the commercials pretend to be idiotic fools who know their man loves them because he buys them a diamond.  Really?

Are women that superficial and that easily assuaged?

These commercials have gotten me so embarrassed about the fact that I like shiny accessories every once in awhile, that I won't go anywhere near a jewelry store.  In fact, if I walk by that section in a store, I cast quick glances that direction, trying to sneak a peak like you would at a secret crush.  I mean, c'mon, who doesn't love some glittery sparkly loveliness?!

But to go all goo-goo ga-ga over a man because he gave me a diamond?  Puhlease, all that means is that he's got money.  I'd go so far as to say these commercials imply that he doesn't love you if he doesn't waste his hard-earned Benjamins on you.  There is so much spoiled, pretentious fuss about it all.

This got me thinking about the business mantra, "Don't bring up the problem without proposing a solution."

And this morning I saw one.  On the side of a bus, an ad with a rock-looking gemstone saying, "Boys like to throw rocks at girls."  Clever.  I would like to see more of this.  Or the funnies in the image below, which isn't an official ad, but by golly it should be. 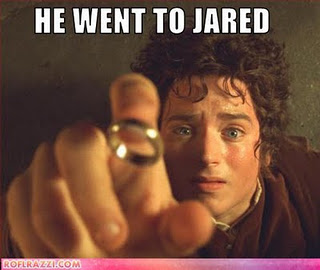 Email ThisBlogThis!Share to TwitterShare to FacebookShare to Pinterest
Labels: Commercials, Funny, Jewelry, Lord of the Rings

Bahahaha. I love the Frodo one! And I'll give it to you, the throwing rocks at girls thing is clever, but if Karl did buy me a diamond, I'd be pissed if he chucked it at me.

Have you heard the Morgan Jewelers radio commercial where the girl is so excited about the box that she doesn't even open it? That commercial drives me nuts! My family puts new stuff in old boxes all the time before wrapping. I keep waiting for her to open it and realize her husband used the jewelry box to put a new pair of socks in, or something... after she's said she's so happy that it's NOT something lame like socks. Seriously. Jewelry commercials are inherently lame.