Relationships: Analogies and the Latest in My Life

Bear with me.  This one is kinda long, but it's some good stuff!

Closing night of "All Shook Up" may have been my best closing night experience thus far.  One of my favorites stepped up his performance so much that he made me, for the first time, fight for my performance - fight to be one step up and noticed.  And also brought me to tears in my own performance...something I have never been able to do.  I love that feeling!

For months, you spend all of your free time together to develop a love and bond with the character, the stage, your cast mates, your production team...and then one day it is over.  One day, in the snap of a finger *poof,* it is all gone, we'll call that the "break up."

I am forever grateful for the opportunities to have been part of something so magical and take those memories to cherish in my heart always instead of being bitter that the show "relationship" is over.   Each experience has helped me to grow exponentially.

I apply the same philosophy of being grateful and growing for what I receive with dating interludes.

Several young men have been expressing interest as of late, pretty normal.  But, in a twist of events, remember this blog? One of them in particular I enjoyed more than the others and had been looking forward to spending more time with him.  What was this?  I actually felt something for him?  Yes, in that excited, giddy way in which I had thought for quite some time I'd been broken.  I hadn't been receptive to his attention.  Until he, for weeks, kept running to catch up to my train.  I was won over by his efforts and gave him a ticket.  I honestly thought he was all aboard the Larissa train and wanting an unlimited pass.

Alas, a little while ago he began to mention (and subsequently mentioned at least five times) to me being excited for a date...with another girl.  I try to never bring up other men I am dating (and I guess I am breaking this rule by writing about it where any of them could see) when I am out with one of them, but there are two reasons I would let it slip: 1. I want him to tell me that he wants to be the one spending time with me, or 2. I am gently breaking the news that I'm just not that into him.  I didn't know which direction to gear my reaction, so I reacted not at all.  Unfortunately, as the days have progressed, the signs are crystal clear that I'm not the one the man I want to get to know most wants to get to know most.  Also, unfortunately, I have no idea what flipped the switch from working harder than any man has worked to catch my attentions to running just as hard the other direction.

The good news?  My heart hurts.  How is this good news?  I can feel!!!  Hallelujah!  I am not broken!  This quote from the Alchemist may sum it up:  "Why do we have to listen to our hearts?" the boy asked, when they had made camp that day.  "Because, wherever your heart is, that is where you'll find your treasure."  "But my heart is agitated," the boy said. "It has its dreams, it gets emotional, and it's become passionate over a woman of the desert. It asks things of me, and it keeps me from sleeping many nights, when I'm thinking about her."  "Well, that's good. Your heart is alive. Keep listening to what it has to say."  "You will never be able to escape from your heart. So it's better to listen to what it has to say. That way, you'll never have to fear an unanticipated blow."

My heart is telling me it is alive and ready!  Like I said in this post - I like to live in a manner in which I have no regrets.  I'm glad I put myself out there and gave myself and the young man a shot, regardless of the outcome.

Cheers to some fabulous relationship-building both on stage and off.  I can't wait for my next adventure! 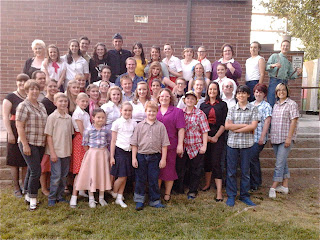 The fact he has made your heart hurt makes me not like him even more...

I'm glad that you learned through this experience that you're not broken -- that the experience was positive enough you hope for another successful audition/ relationship soon. I love to see you so happy, and I'm excited to meet the next guy who encourages you to feel that way!

P.S. I love the analogy -- used it myself -- but I don't want you going into any relationship expecting it to end abruptly like a play does. Just wanted to make sure that was said.

I follow your blog regularly and I am always impressed with the things you post. While I am sad that you are in between men, I am also happy about it. I have wanted to take you out for quite some time. You will be hearing from me soon!

Ha - WHOA Anonymous! I've already got two dates planned...wonder if you are one of 'em? Ha. Too much;-)

Megs - I love you, thank you!
Kristen - I love you too, but you should try to like the fella. If he's good enough for me to befriend, he can't be too shabby:-)

"i much prefer computers. there is no emotional ambiguity in 1's and 0's" a friend of mine said when we were discussing our love lives... i know what you mean about not really feeling that something for someone stage but it just seems to get worse as you get older. But i am always obssessed about someone that will never change.

1. I want him to tell me that he wants to be the one spending time with me, or 2. I am gently breaking the news that I'm just not that into him. I didn't know which direction to gear my reaction, so I reacted not at all. Unfortunately, as the days have progressed, the signs are crystal clear that I'm not the one the man I want to get to know most wants to get to know most. Also, unfortunately, I have no idea what flipped the switch from working harder than any man has worked to catch my attentions to running just as hard the other direction.

This post is meant with love.
From what you say, it sounds like he was working very hard, but you "reacted not at all?" I wonder if this had anything to do with it. What were you doing to catch his attention? Sometimes I have been in a relationship where I feel like I'm doing all the work and the relationship for me seems unfruitful because the reciprocation is uneven or nonexistent. Did you let him know his efforts were working? How? Let's face it, most guys are dense and need a little help when it comes to women.
I am sorry you are hurting. You deserve so much happiness.

Thank you for your comment. I meant I reacted not at all to his mentioning the other girl because I didn't know if he was trying to get rid of me or trying to get me to tell him how I felt.
I thought I was pretty clear I was interested...I snuggled with him quite a bit (I am not a snuggle ho at all), gave him the little free time I had, and even asked him on a date to something quite spendy (he couldn't go). I reciprocated all his efforts I thought. The situation caught me off guard because I am used to being the initiator and the one doing all the sweet things but this guy beat me to the punch. It was a VERY good experience, I learned some great things that will hopefully help me in my next dating leap of faith.
I am happy to answer any other questions! :-)