Joseph and the Amazing Technicolor Dreamcoat Goes to Hale

Once upon a time I had a deep love for Joseph and the Amazing Technicolor Dreamcoat.   If you don't know the plot, go read the Bible.  My mother even took me out of school one day to surprise me with seeing the touring production.  I have performed many of these songs and know each one by heart.  Something happened, what I am not sure.  Maybe it's like how your favorite foods change, or your taste in clothing, but I grew to detest this show.

Until I saw it last week at Hale Centre Theatre in West Valley City, Utah (HCT).

Children are plucked from the audience to listen to the narrator sing her first song.  The thing I loved about her (T, TH, S cast - I can't find my program or the cast list online to name names), more than any other narrator I've seen, is that she is quite engaging in the story and with the audience.  She is, in essence narrating the story for us.  Most narrators I've seen stand there and look pretty whilst singing - most of the time you don't even know where on stage they are.  I cannot rave about this performer enough.  I loved everything about her - her look, her angelic singing, her presence.  She was the caretaker over all of these performers and held the show in the palm of her hand. I'd have seen it just for her!

Our Joseph, well,  his vocal skills are flawless and I actually preferred his high tenor, which is a rarity.

The rest of the performers come on stage and at first I squinted a little at the velveeta, but they were so relentless in their enthusiasm, they had me entirely won over by the end of "One More Angel in Heaven."  I am now convinced that perhaps being in the ensemble of this show would be better than having the leading role in another.  Don't hold me to that though - I still want parts!  I've never auditioned for a Hale show - perhaps I should start doing that...I would love to be a part of a production like this.

Because I have seen over eighty professional productions in NYC, I'm not as prone to clapping when an elaborate set piece comes out.  Seems I forget how much work goes into those and that we should clap for the pro team as well as the performers.  Naturally as the stage went spinning and twirling and an electronic goat made his debut, the audience exploded.  Likewise, there is a life-size camel that set the entire place abuzz.  Kudos.

All the excuses I usually make for community theater (sound crackling, weird costumes, bad lighting, etc.)?  I have to make none of those for Joseph.  Many have argued that this venue isn't exactly "community" theater.  Regardless.  Everything went off flawlessly.  Time for my shout-out to the comrades I have in the show - Jonathan Tate, Janine Crockett, and Galen Chatterton (unfortunately I didn't get to see Janine or Galen in the cast I saw)!

Lastly, I want to share with you my favorite part of the show.  I have never felt touched in this portion of the show, which is perhaps why it struck my heart.  Towards the end, Joseph is reunited with his father.  Typically you see the father with a grin on his face welcome Joseph into his wide-spread arms.  You never get the impression that the father has been apart from his most beloved son, whom he thought was dead, for many long years.  I cannot describe to you the emotion on the Hale stage when Jacob realized he was standing before his son and began sobbing as he collapsed into Joseph's arms.  Oh goodness, I'm getting teary-eyed again.

You can still catch the show until September 24.  Go, Go, Go here for more information. 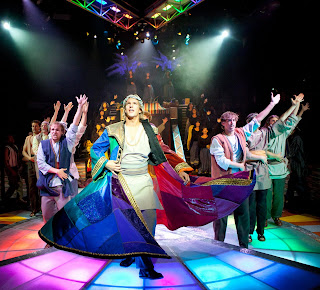