Into The Woods with Taylorsville Arts

The show is over.  Do I still write?

I had a unique opportunity with this show.  My darling, Megan Smyth, played the enchanting Cinderella and asked me if I would come take some short video clips for her to check out her performance.   On top of this, most of my team from Nunsense was involved in the show.  Wendy Dahl-Smedshammer (Sister Hubert) directed, Michelle Johnson (Choreographer) choreographed, Leah Jacobs (Sister Robert Anne) did hair and make-up, and Sandra Houlihan (Reverend Mother) played the stepmother.   Needless to say, I felt right at home and a bit nostalgic.

This particular production had four weeks from casting call to opening night.  What's this you say?  Four weeks for a three-hour Sondheim show?  Who was released from the insane asylum?  Yeah, I know.  I couldn't believe it either.

If you are unfamiliar with the story of "Into the Woods," just imagine every fairy-tale character you know coming together for a first act of "Happily Ever After" and a second half of the opposite.. yet not.  The baker and his wife cannot have children and must go into the woods to fetch some magical items for a witch who will in return grant them a child.  They encounter several princes and princesses along the way and so the journey of the show begins.

I have not traditionally been a fan of Sondheim or of this show.  I love the characters in the show, so I've always wanted to be Little Red (although I've been informed I am more of a Cinderella).  I may or may not have thought the show was over at intermission the very first time I saw it.  So long.  I have avoided the show ever since.

I arrived at the Amphitheater for my first viewing of a dress rehearsal two nights before open.  No lights.  No microphones.  Oy.  Half the cast looked confused (working with a live orchestra is amazing, yet challenging), the other half looked like they were trying to reign them in.  I witnessed stops, starts, flubbed lines, overly energetic lines, cows running into brick walls, profanities, set pieces being "constructed" with plastic zip ties, you name it.  This, however, is what dress rehearsals are for.  My fellow actors and I always say we are "getting it all out of our system."

I went again the next night for their final dress rehearsal.  Can I say how exponentially better the show was in one day?  Half the cast had sound and half of the time there were lights.  But really, why am I wasting time writing about the dress rehearsals?

I saw the actual show on Saturday August 6th and I loved it.  One character in particular was probably entertaining for the wrong reasons, but we laughed our heads off nonetheless.  Again, I don't have my program with me, so I don't really recall the names of the cast members.  I'll share with you those who stood out in my mind.

Cinderella.  Megan may think I'm saying this just because I am one of her besties and love her so, but I'm not!  She glows, glitters, twinkles on stage - lighting up everything around her.  I've been in a show with her, but I couldn't get a feel for her presence while I shared the stage with her when I was being a totally self-absorbed character.  She has a lovely, sweet soprano voice that floated around just the way you would imagine Cinderella's.  Her character may not have had the best lines, but she had the best glow.  Her character falls a lot on stage and the first time I witnessed this, I honestly thought she had tripped and wanted to go save her.  Towards the end of the show, she is a comfort and guide to Little Red, singing, "No one is Alone," and she simply exuded the love of a mother.

Little Red.  Andrea Fife is a friend of a friend, so I've seen her in a couple of shows before (Oklahoma, Joseph....) as a more ensemble member.  I'm here to say, she is better than ensemble.  I've dreamed for 14 years of playing this part, so I was initially going nuts as I'd watch her character do certain things and I thought, "But I would have done it this way!  More animation!"  But you know what?  She nailed it.  Her interpretation of Little Red as a matter-of-fact, who-cares, this-is-what-I-want, semi-brat was spot-on.  My theater degree friend called her brilliant.  He does not lightly throw out praise like this.  At least he's never given me any praise at all, so...yeah.  She had a pitch-perfect voice, rhythm, and the brattiest skip.

Cinderella's Prince.  He was tall and lanky, yet somehow his smile outshone his height and his Disney-esque sappy, cornball prince does charm me.  Charisma, that's the word.  He draws you to him.  And makes you laugh.

Lastly for the stand-out's, Jamie Taylor as the Witch.  She has remarkable singing ability, yet her voice had enough grit to it to pull off being wicked.  Her character has odd lines and mannerisms and Jamie did not hold back with anything she portrayed.  And talk about projection - she's got it.  Wow.

Lighting and sound?  I learned that shows are a lot better with them than without them.  Outside theater is rough and pulling it off at all is a challenge.  Pulling it off well?  A feat, good thing this cast knows how to conquer giant feet (Ha - get it?  You do if you saw the show).  Again, I will say I love a live orchestra.  I know this adds countless hours of work and stress for the city and the cast, yet it is entirely beneficial to the show and makes the quality that much better.

The set was minimal, yet endearing.  We all agreed that less is more in this outdoor amphitheater with greenery abounding everywhere around the stage, especially above.

My favorite parts?  "You are Not Alone" and the closing number.  All of these characters, most who can be construed as selfish, come together in the end.  Dead or alive.  Hey, I never said it was an entirely happy ending.  Some of the lyrics that touch the audience: "People make mistakes. People make mistakes.  Fathers, Mothers, People make mistakes, Holding their own, Thinking they're alone....  Maybe we forgot:  They are not alone. No one is alone."  Of course, the last lyrics of the night are "Happily Ever After."

If you didn't see it, I'm sorry you missed it. 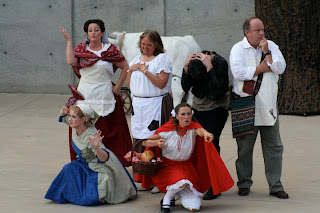 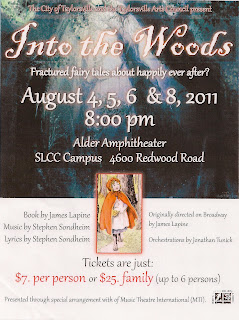 Thanks for this wonderful review, Larissa :) For some reason, it hadn't occurred to me that you hadn't really seen me onstage before. I'm so glad I didn't disappoint! I love you! Next time, let's do a show together, okay?

I went on Monday night. I know a guy who played in the orchestra; I'm gonna show him your blog.

Despite the length, this is one of my all time favorite musicals. You would be a great Cinderella, but I would love to see you as Red. Some day, when we live on the same half of the country again.