I have had the following ten (and really, this is quite narrowed down) alarming occurrences on first dates:
What kind of odd things have you experienced on first dates? 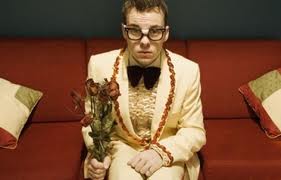 That is SOLID GOLD!!! LOVE it! Guess they didn't get second dates?

I once had a guy stalk me at a show I was doing. Well, TWO, actually.

My favorite was the guy who asked me out, and didn't remember that we had worked together and he was a complete and total TOAD to me.

Watching him try to back pedal his way out of not only forgetting that we had worked together for over a year (I was his supervisor) and then make lame excuses to validate his behavior was hilarious.

Needless to say I used my 'back up plan' that night.

hahahahahahahaha!!!!! Seriously, all i can do is laugh! So much amazingness going on right now.

I've gotten the jail one. That same guy confessed to having never read a book except the Book of Mormon.

I also had a guy ask me for my thoughts on the Iraq War, and when I said I didn't think politics were the best first-date topic, he insisted so I told him what I thought. (Including my thoughts on the use of privatized military contractors, which is what I was writing my seminar paper on for law school.) Then I asked him what he thought and he looked at his food and said, "I think we probably shouldn't discuss this."

Your epic stories are much more numerous than mine, hahaha! I really only have one. This guy told me about this 'spiritual' car journey he took back home to Chicago in which he got caught in a hurricane, got out of his car and got clipped by a trailer driving past. Then he told me he DIED. He said he knew he died because he remembered what it felt like from when he died before. For 8 minutes...... Then he told me about how he woke up in his car (after dying on the road...) with a police man knocking on his window. They searched his car because the license plate was expired and found an old blood covered rusty knife. I asked him to take me home....

I've never had to use my backup plan or talk about politics...maybe I should come up with a backup plan..hmm...

You don't have a girlfriend call you 30 minutes or so into a date to give you an out if you need it on an iffy first date?

Talk to me tonight. I'll explain.

Oh I know what the "out" is, I've just never agreed to a first date where I think I may need one.