I've long had the nose of a bloodhound.

As a child, I would come home from elementary school, open the front door, and pause for just a moment before boldly asking my mom, "Where's the chocolate?"

You see, she would buy bulk chocolate and cut it up into pieces and hide it from us, occasionally bringing out pieces.  The only problem was that I thwarted her masterplan because I could smell from a mile away - just the mere fact that she'd had chocolate in the house perked my little sniffer right up.

Chocolate brings me to another of life's greatest treats...men.

Both can be sweet or bitter, desired or avoided, but the similarity I am going for right now is smell.

I've dated, or come close to dating, some guys who just were not up to snuff...or sniff, as it were.  I've often asked questions of my friends like:
Is it just me, or does that guy smell like wet cotton and clothes that have been hanging in the closet too long?
Have you smelled that guy's breath?  I can't get within a foot of him!  No?  Just me?
That guy rocks at frisbee, but probably because no one ever guards him because he smells like BO.  What?  You've never smelled it when you guard him?  Weird.

Then there is the converse:
Did you smell him?  I thought he was totally unattractive until I caught a whiff of how good he smells!
Don't you love it when you kiss and his smell lingers with you?

I have never been shy about hooking men up with cologne when I think it will help their cause, or politely handing someone a piece of gum.  Lucky for me, I give people gum all the time and nine times out of ten, it is not a necessity, but a nicety.

I cannot think of one relationship where smell did not play some factor in my decisions.  Crazy, right?  Or not...

I've recently stumbled upon quite a few articles and research backing up my olfactory omniscience.


This article states:
Dating has long been associated with masquerade. It is well known that the codes and signals women employ to attract a mate - provocative dress, coy and flirtatious behavior (driven by sexual fantasy) - are deeply rooted in evolutionary biology. Often unrecognized, however, is the role that the sense of smell plays in the evolutionary system of attraction. We each produce a chemical aura as unique as our fingerprints. Starting at puberty, feasts of aromatic chemicals that make up our individual "odor-prints" communicate our sexual compatibility. This continues through our fertile lives and is perceived by others on an unconscious level...
One way in which humans communicate with each other is through the senses of smell and taste. Attraction is quite literally about chemistry; our noses have receptors for scent molecules, some so fine-tuned that even consciously imperceptible chemicals are apprehended and processed by the brain on an unconscious level. The majority of the aromatic information that we receive from other humans is apprehended in this way.
Evolutionary biologists had long hypothesized that humans pick mates by smelling them, but this was only proven in 1995 by biologist Claus Wedekind in a groundbreaking initial study while at the University of Bern...read more here.


Another article states:
What’s the most important factor in choosing a lover – is it eyes, smile, wealth, ambition, personality, or outward appearance? Not surprisingly, friendliness is the most important factor for both men and women, and if you’re a woman at Brown University, the second most important thing to you is how your potential lover smells. Think this is weird? Rachel Herz of Brown University’s Department of Psychology and Michael Inzlicht of New York University’s Department of Applied Psychology conducted a study to quantify how important smell is to men and women when it comes to choosing their lovers...
Herz and Inzlicht’s research debunks previous theories of mate selection. For example, according to Buss’s 1989 study, men have stereotypically been charged with seeking women with “good looks,” whereas women look for men of “high social status and wealth.” Herz and Inzlicht expand on such previous experiments by investigating the relationship between attraction and the sense of smell. This factor is relevant because a pleasing natural smell may indicate that the potential lover has a healthy immune system...
So why do you like that average looking fellow? How come that ordinary lady in your writing class looks good to you? You can’t figure out for the life of you why you keep thinking about him. Could it be because you caught a whiff of his natural scent? The take-home message of this study is that women should look their best and be pleasant, and that men should smell nice and treat their women well.   Read more here.

Glamour Magazine recently published some research that shows that those with a keen sense of smell are happier because their communication levels are higher as are their cues to social propriety.

Did you know that there are even Pheromone Parties?  And dating websites catering towards matching people based on smell?  This is kinda creepy, but, hey, if it works...

I feel a little relieved to know that science is backing up my decisions when I can't bring myself to date a guy because his smell rubs me the wrong way.

Have you had any interesting experiences involving dating and smells? 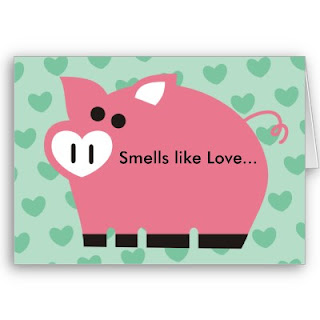 Well, now I'm going to be self-conscious forever. Thanks.

When the lights go out, will that matters is how you move and how you smell.

I fell in love with a guy (secretly). He was wonderful and I knew he would treat me the way I always wanted to be treated, however I could never imagine me making love to him because of his smell. I'm sorry but a good smelling man is absolute!

I've switched from one cologne or body spray to another one because a girlfriend at the time had a preference. It's hard not to feel special when someone gets a good whiff and says "Mmmmm...."

I've been told by more than one man that I smell just like sunshine...which I LOVE!

I think smell has a LOT to do with attraction! But I can't say more, as this is a PG-rated blog. :P

I also have an overactive olfactory sense and sometimes Dave has the WORST breath EVER! Course then I just have to remind myself it's not his fault. He has achalasia (nerves in the esophagus have died, so food does not go down into the stomach as it should) and had surgery where the sphincter into his stomach has been cut. Basically his stomach is always open, and that does not allow for nice smelling breath. So...I just keep gum around and give him a piece ALL THE TIME :) Good thing I love him, huh?

100% agree. There have been girls I was extremely attracted to visually, but then just didn't feel it with them because of a smell issue (not necessarily a bad smell, just didn't quite seem right for me). I've also dated girls that were so much more attractive to me because they had that 'right smell' to go along with their cute looks and fun personality. Yay for science!