Withholding the Truth vs. Lying

There is a very fine line between "withholding the truth" and "lying."

I can think of a time, years ago, where I pretended to like video games because a guy I was dating loved them.  Was this a lie for me not to tell him (for the record, I don't hate them, I just don't get them)?  I suppose it doesn't matter because the relationship ended after a couple of months, but if it hadn't ended....would it have been a lie for me to go into a committed relationship with him whilst he was under the illusion he was getting a person he was not?  If I told him the truth and he didn't care, then it would be okay.

Now take that to the extreme.  After a certain amount of time, is it a lie to not tell someone about major health, addiction, or mental issues?

I have never personally experienced someone withholding information like this from me, but events in others' lives have caused me to wonder.

I want to know what you all think about this. 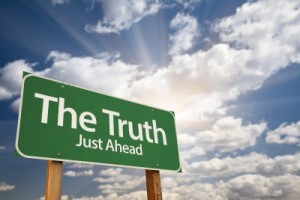 It's the nature of an addict to conceal the severity of his or her problem. Groups like Alcoholics Anonymous encourage people to maintain some secrecy when it comes to their addiction. Alcoholics are actively discouraged from revealing their weaknesses to people who might not understand. However, when the addiction affects someone else (like a spouse, family member, or other loved one), then secrecy is no longer an option, nor is it healthy.

Omission is still a form of lying IMO, and any relationship that isn't honest is doomed to fail.

For the little stuff-who cares if you don't like video games as much as your sweetie? If he/she really cares for you it shouldn't be a deal breaker-as long as you aren't constantly trashing their interests. Tell them from the get go so you don't have to worry about them finding out later (or through someone else) that their Assassin's Creed game nights aren't really your thing. You want them to get to know the REAL you anyway, right?

As far as the big ticket stuff goes: addiction, mental illness, etc., I would say you need to tell them as soon as it becomes serious.

I think you should be honest all the way, even with the little stuff. However, I believe that being honest and being tactful must go hand in hand because your honesty can hurt someone whether you realize it or not. (And I HATE it when someone does hurt you and uses the excuse of "I'm just being honest" as a scape goat apology.)
When I was getting a divorce, I had a teacher for my required child custody class teach us that even the small stuff can turn into something big. So Riss, in your example of video games, he could've one day recented you for not liking them because he could've possibly picked you because you said you liked them.
One of my deciding factors about breaking up with someone was because he didn't like fish. And I love fish!! To him it was no big deal that he hated fish, but to me it was devastating. Silly I know, but small things can become huge.
Someone once told me, "Dating is like flashing someone. You can't just show them your leg or arm. You have to bare it all otherwise they will never get to know the real you." ;)

Skeletons in the closet are definitely not first date material. Just like how couples progress from holding hands to kissing and beyond, there's a progression from putting your best foot forward to sharing your intimate secrets. There are some topics that shouldn't be brought up until you're to the point of talking marriage (though I hope everything has been revealed by the time you actually get engaged).

But I think your post here is more about the small stuff. I think that the answer is found in the intent. If your intent in pretending to like video games was to get him to like you because of a false impression, it was probably dishonest. But if you pretended to like them because being with him was more important than doing something you enjoyed, I think it's okay - because it's not about deceiving him, it's about giving.