Friday night, I hit up Murray Amphitheater for their latest "Arts in the Park" production  - Hello, Dolly.

I must tell you, "old school" Broadway isn't typically my cup of tea.  I've performed a 30-minute montage of this show before, which usually warms your heart with familiarity and nostalgia a little, but not in this case.

What did I like about this show?
I adore the feistiness of Dolly Levi and the pinache with which Sara McDonald portrayed her in acting.  Dolly's costumes were out of this world - fitting Sara like a glove and giving me a serious case of covetousness.  Rossy Thrall as Minnie had spunk enough to give me a smile on more than one occassion.  Galen Chatterton's curmudgeonly Horace Vandergelder had me convinced.  Ernestina Money was definitely the much-needed comic relief.

I recognize all of the immense amount of work that went into this show, as I've received updates regularly from cast members.  I recognize many community members love the show because I was witness to some exuberant audience members who thought the show was a sing-along based on the various singers I heard from behind me throughout the show.  Another little girl was singing "Hello Dolly" at the top of her lungs while using the restroom during intermission.  I watched the elderly audience members light up when the spotlight hit Dolly (Sara McDonald) in her gorgeous red gown as she descended the stairs singing "Hello, Dolly."

I wanted to love the whole instead of the sum of the parts.  Overall, however, I simply was not won over.  If you are a fan of the show, you will be tickled to see it. You can catch the show for $10 at 8pm at the Murray Park Amphitheater - 493 East 5300 South - through Wednesday, August 1. 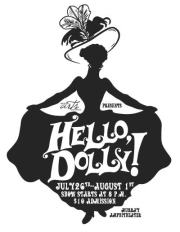