If you've been friends with me for any period of time, you've probably heard me utter the words, "I don't watch R-rated movies."  I own over 550 movies and not a single one of them is of that rating.

You see, it is easier to simply give that blanket statement than to say, "If I feel it is a historically important film - aka Schindler's List - then I will watch it.  Or if someone knows me well and can fast forward anything I'm sensitive about then I'm okay.  Or if there is no nudity and only two F-bombs.  Or, or, or."  I hate when people don't know me well and try to convince me to watch something I'm nervous about because, "Well you watched that R-rated film, why not this one?"

I'm a sensitive soul.  Regardless of if I were LDS or not, I would not watch a lot of the more crude films.  I do not care to see other people's sexy time or explicit guts or drug use or hear the F-bomb fifty times.  I have a very vivid imagination - I get the point.  I have a ClearPlay to edit when in doubt.  Basically, what I'm saying is that I have seen less than two dozen R-rated films in my life because it is just easier, given all the contributing factors to that decision.

Here's where I confuse the snot out of myself.  The filter I have with movies is not the same filter I have with stage productions.  My favorite musical is Jersey Boys.  I haven't counted in any of my three viewings thus far, but I'm pretty sure they drop the F-bomb at least 40 times in that show.  Once and Next to Normal  are both productions with some heavy swearing and mature content, yet both are shows I would highly recommend.  Honestly?  These productions enrich me instead of offend me.  Greatly enrich me...touching some place deep inside of me I rarely know exists except when I am enraptured in these shows.

Back to the movies.

Two nights ago I had my first experience with Waiting for Guffman.  It is rated-R.  And I love this movie - I laughed my face off (I'd say laughed my butt off, but it is still quite prominently there...as is my face, but you get the point).  If you have ever been in any community theater production, this movie should be on your must-see list.

But what about the rating?  I am disillusioned.  Was this movie offensive or crass?  Not at all, in my opinion.  In fact, I would venture to say that at least half of the PG-13 movies I have recently seen were much, much, much more assaulting to sensitivities.

So where is the line?  R-rated films are of the devil, right?  I'm afraid to say that is far from true.  A good standard, yes, but not all-encompassing. 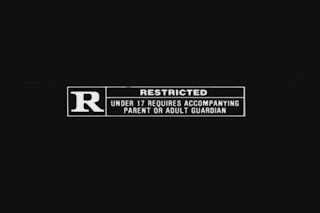 I don't trust the MPAA rating system to identify movies I shouldn't watch. There are R movies that meet my standards for entertainment, and there are PG-13 which don't. However, I do use the rating system as a guideline, abd I'm willing to adjust on a case by case basis. That said, its much easier to make a blanket rule than to explain to people why movie A and not movie B.

I agree with going with a person's sensitivities. I hate the F-Bomb and are annoyed by sex scenes. Violence and gore I have no issue with. I know movies affect me, but there are times I often say 'I want to watch a 'blow-em-up' show. For me violent movies only really make me want to go out and work out or something similar. I do prefer PG-13 movies due to quality, but I do not reject a movie solely on the rating. I look up plots and and watch trailers so I know what it is about and what to expect.

Violence, sex, and all those other things that create the "R" rating are tools in a writer's hands. Their usage should be deliberate and calculated for greater impact, not simply to shock and titillate. Without purpose, explicit violence, sex, and language are really no better than pornography.

In my opinion, it's a VERY rare movie that employs graphic violence and sexuality effectively - and I haven't seen many that do.

I grew up in a house where Rated R was a definite NO. I can still count the number of Rated R movies I've seen on one...maybe two (now) hands. And have similar standards, if it is historic (The Patriot, Saving Private Ryan, Schindler's List, etc.) it's easy enough for me to justify. I don't like crude. I don't think those R-rated comedies like The Hangover or Knocked-Up are remotely funny. And I've seen PG-13 movies that are definitely worse than a few of the R-rated films I've seen.... it's all using your best judgment.

For me I won't NOT see a movie because it's rated 'R', but I won't see something just because it is, either.

I try to do some research and find out why it's rated what it is and honestly the only things I really draw the line is gratuitous violence/gore/or nudity/sexuality. Regardless of if it's in context or not it takes me right out of the movie. Language doesn't bother me as much (unless it's REALLY crude and crass beyond the f-word) because you can hear much worse in your day to day life.

There are a few PG-13 movies that are much much worse than a few of the R-rated ones in my own collection for sure.

That's my rationalization and I'm sticking to it.

I will watch Rated-R movies. I am not particularly bothered by language or violence, but I don't like gratuitous nudity. I typically do some research before seeing a movie. For example, one of my favorite movies is Little Miss Sunshine. There is no nudity and no violence, just language. I feel I would have missed out had I let that keep me from seeing it.

Or, the King's Speech. There is one scene that shows obscene language in a speech therapy setting and it was still given an R-rating. That just doesn't seem right to me, as it was an amazing, inspiring, even uplifting movie.


The Other Boleyn Girl was PG-13, but I found it completely risque.

So basically, I just go with my gut and do a little research before watching something. I do draw a definite hard line on most R-rated comedies though. Just too crude for my taste.

I used to draw a hard line on all R-rated movies, but I find that I am actually more thoughtful in my movie consumption choices now than I used to be.

An easy way to avoid the conundrum altogether is to wait until you're in a country with a different rating system to watch your "questionable" movies. I think I've only seen one or two R-rated movies in my life, because when I saw Braveheart, Gladiator, Green Mile, etc., they were rated "18." (Yes, I watched all of these while on my mission--two wrongs make a right, right?) Also, many movies release "Unrated" versions on video, so you can safely watch them without feeling guilty.

In all seriousness, though, it's probably not wise to rely on people who don't share your values to adequately protect you from or warn you about content you don't want to see. A single F-bomb used to nab a movie an R automatically, but that is clearly not the case anymore. If this is something that really concerns you, making a hard-and-fast "no R" rule (even for "acceptable" movies like Schindler's List) and being prudent with other ratings is a great way to approach it. There will still be more enjoyable and appropriate movies available than you can ever watch (plus all the great TV out there, not to mention all the stuff that doesn't involve a screen, like 50 Shades of Gray [oh wait, I was being serious in this paragraph]).

Oh, and Waiting For Guffman is awesome.