Hold up, I forgot something major in this timeline of postings - the Hannah Montana concert!!!!
That's right! I own a shirt that says, "Hannah Montana rocks!" Not of my own doing, mind you. My sister was the master plotter in this conspiracy. October 27th she and I and a bunch of her friends attended the concert of the biggest ticket seller of the year, so I hear. The best part of all of this was that we had her friend's 13-year old daughter with us, who is a MEGA Hannah fan and had NO idea we were going to the concert. We stopped at our favorite place to eat, Sweet Tomatoes, on the way to the concert and managed to each slip away and put on our Hannah shirts until she realized we were all wearing aforementioned shirts and she exclaimed, "What? Where did you guys get those shirts? What's going on?"
Brit strategically slipped her ticket in front of her at this point in time and I asked, "Hey, Em, what's that in front of you?" She picked it up and did everything she could to keep from screaming, including yelling, "I can't scream because we are in a public place!" She was so cute!!!! She was even shaking!!!
So, the concert was fun, but the best part was helping this 13-year old fulfill one of her dreams:-) 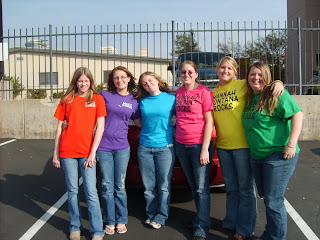