Many of you are probably not too familiar with the plot of this 1998 Jason Robert Brown piece.  The show begins with a young soldier and his girlfriend enjoying a picnic before he heads off to fight the civil war.  We re-enter the show 50 years later on the day of the Confederate Memorial Day Parade in 1913.  Little 13-year old Mary Phagan talks with her friends about attending a movie show later that evening after she picks up her pay from the pencil factory.  Unfortunately, that was the last her friends saw of her until her body was discovered in the basement of the factory.  Leo Frank, the Jewish, Brooklyn-native superintendent of the factory, was the last to see Mary alive.  Georgia's solicitor general, Hugh Dorsey, rallied dozens of testimonies to "prove" Frank the murderer and Frank was sentenced to death.  Upon being approached by Frank's wife Lucille, Governor of Georgia Frank Slaton, reopened the case because the evidence and testimonies did not stack up.  Leo's death sentence was altered to life in prison as the case was reviewed, he was moved to another prison, and in all likelihood he would have been pardoned.  On August 17, 1915, a mob of 25 men raided his prison cell and hung him from a tree in Mary Phagan's home town.  Some believe that this group of Hugh Dorsey supporters, known as the Knights of Mary Phagan, eventually gave rise to the re-birth of the KKK.

Jason Robert Brown is some tough composition - entrances in the middle of musical vamps, intricate harmonies, tempo craziness, you theater people out there know what I'm talking about.  Of course there were  harmonic blunders and hesitancies on some choral entrances and tempos.  Impressively, the soloists all found their entrances without a hitch...either that or the orchestra was as fantastic as I know they were and were so flawlessly following the actors that I didn't notice anything too off.  Well played, orchestra!

I must begin with a few items I would like to rave about.

Summer Sloan as Mary Phagan lit up the stage every time she appeared.  I adored this breath-of-fresh-air actress and was sorely disappointed her character was killed after only one number for her.  She does reappear several times throughout the show in some very cleverly blocked scenes and continues to win the audience over with her vibrance and life.

Scott Cluff shared with the audience the pain and emotional turmoil of Leo Frank.  At the beginning of the show, you find yourself watching the every-man we all know - married, getting ready to start a family, working for the man, and seemingly struggling with something internally.  After Mary's death, we see him close off emotionally to his adoring wife, act suspicious, and, well, you really just don't care for him much.  We are not shown the events of the day of the murder, yet are lead to believe he did not commit the crime.  But something in the way Cluff portrays Leo leaves this nagging thought in the back of your mind, "Did he do it?"  He does an amazing job in the first act with setting up his character to be suspect and unendearing to give the audience the inquisitiveness we need to become invested in the show.  In the second act, Leo warms up to his wife, becomes human, makes us root for him to be found innocent.  What a great character arc, Scott Cluff, thank you!  And shall I mention his voice?  He sings with the crystal clarity of an angel.  After his first number, I leaned over to my friend and whispered, "He's GOOoooood."  I believe his character's final lines embody Leo Frank and left my heart touched as he shared his belief that God had a hand and a reason in everything and that he has not gone through the past two years to stand and confess a lie at his death - he is innocent.

I cannot write this without mentioning the ability of Adrien Swenson to rip your heart out as Lucille Frank.  She is devoted, loving, and dedicated even when Leo talks to her as no wife should be.  We first see her as a Southern Belle, with an ideal life and a husband to support her.  Throughout the evening, we see Adrien turn Lucille into a strong woman who can run not only her life, but also come to the aid of her husband - ultimately earning him the change of his sentencing.  Through Lucille, you are able to better see the changes in Leo.  If these two had not had the precise chemistry and nuance they had, the show would not have worked.  Adrien's voice is also quite reminiscent of Marin Mazzie's in Ragtime - gorgeous, emotional, raw when necessary, refined when necessary, just absolutely necessary to the show.  Bravo!

Hats off also, to the abundance of performers filling the evening in roles big and small.  Jen Chapman as the girl who can do anything she wants, Iola Stover, is gorgeous on stage as she portrays the youth, brattiness, and vulnerability of a child caught up in a murder trial.  She leads her fellow Factory Girls (Sasha Sloan as Essie, Laurie Carlson as Monteen) in what I see as a 1913 version of "Mean Girls."  Brent Sloan as Hugh Dorsey fits the bill with his classic look of the middle-aged, attractive southern lawyer...who turns out to be a snake.  Jacob Shamy's Tom Watson is the most stubbornly convicted persecutor of Leo, swaying the mobs with his constant reinforcement of needing to take a stand - "Where will you stand when the flood comes?"  The only comic relief I found, and much enjoyed, in this show was the five or six lines shared by Sally Slaton, played by Heidi Smith opposite Nolan Mitchell's beautiful change-of-heart performance as Governor Slaton.  The list goes on, the individual characters all performed with passion - Jann LeVitre as Mrs. Phagan, James Naylor as Frankie Epps, Rose Bench as Minnie Mcknight, Rocky Revels and Judge Roan, Jeff Robinson as Luther Rosser, Conor Thompson as Peavy, and the rest of the ensemble.

I did find a few things rather distracting and unfortunate.  The orchestra is placed downstage, (the forward portion of the stage) stage left (the left side of the stage from an actor's point of view standing on the stage), which is great placement so as to not be distracting aesthetically.  Aurally, however, the performers were drowned out, although this did seem to balance out in the second act.  There was also a set-piece used throughout the show, a platform with three sets of stairs, that liked to sing (squeak loudly) along with the performers, and during all of the blackouts, in an almost comical way.  At one point, a larger cast member walked across the platform and it split in two.  Boy did that about give me a heart attack.  One other performer tripped and fell up when the stairs reared on him like a horse.  In our audience, we also had these annoying patrons in the back corner who were giggling at the most unfortunate times and making noises the entire first act.  Needless to say, they were reported to the usher's at intermission and it stopped.  Back to the on-stage antics, there were a couple of performers who were singing out of their range (example - baritone singing tenor) rather well, but then they attempted to hold out some big notes for big times.  They shouldn't have.  Lastly, and rather nit-picky of me, when Mary Phagan's body is placed on the stage for Leo Frank to identify, the body is placed so far downstage that I would guess at least half the audience could not see her.  I know I couldn't and I was in the middle of the fifth row.  The show is heavy, the content is extremely difficult.  The execution was far from perfect, however the audience leaves feeling all of what Parade intends to convey...I consider this a success.  My heart has been touched.

If you can't tell from the plot summary, the evening Parade provides is not one of laughs and light-heartedness.  Be prepared for a heavy evening that may leave you enraged.  I cannot believe we people used to be so biggoted, so stupid, so asinine, so willing to be led by the Pied Piper.  As an audience member, you will be left wondering when to clap because, most often, a performer will have delivered a beautiful ballad or rousing tune but the content leaves you feeling anything and everything except the desire to clap.

Yet clap they did.  The cast of Parade earned themselves a standing ovation from over half of the audience.

I left the theater more grateful for my life, for my faith, for my loved ones.  If you would like to see Parade, you can still catch them Friday October 7 through Saturday October 15 at 7:30pm (Saturday October 15 Matinee @ 2) in the Leona Wagner Black Box Theater.  Buy tickets here. 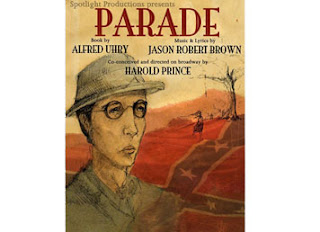 Thanks for posting this review, Riss! I'm sad I missed the show, but am glad to hear it was a good one :)

P.S. I always think it's funny that your reviews are among your most-read posts, but nobody ever comments on them. Thank you for posting them anyway!