(please excuse any errors, I will make edits as the day allows - I wanted to get this quickly posted as soon as I finished)

What do you picture when you think about a side show from days of old?

You get them all at Side Show - Utah Repertory Theatre Company's premiere.

Keep in mind, when you enter any magic show or carnival attraction, part of you wants to be fooled with illusion.  We call this, suspension of disbelief.  Philosopher Samuel Taylor Coleridge explained, "If a writer could infuse a "human interest and a semblance of truth" into a fantastic tale, the reader would suspend judgment concerning the implausibility of the narrative."  Take that little nugget and put it in your pocket when you see Side Show, you'll need it frequently.

Also, if you have a dark sense of humor, I forewarn you about the irony of lyrics such as, "We were meant to share each moment, beside you is where I will stay.  Ever more and always, we'll be one though we're two.  I will never leave you."

Once we entered the intimate, tiny space of the Echo Theater, some "freaks" walked us to our seats.  We were greeted with the pre-show magical talents of  Elias Caress, which immediately created the atmosphere desired for a side show - that of a group of people gathering in a dark corner, intrigued with the mystery of what lies behind the curtain.

In this case, that is the mystery of the story of Daisy (Adrien Swenson) and Violet (Angela Jeffries) Hilton, Siamese Twins of eventual Vaudeville fame.  We begin at a local side show and watch them grow through love and loss to pseudo-fame through the help of Vaudeville agent, Terry Connor (Aleksndr Arteaga), his friend, Buddy Foster (Taylor Eliason), and the twins' best friend, Jake (Cooper Howell).  And that's really all you need to know.

A certain feeling of intrigue, discomfort, and confusion sets over you as the characters appear on stage.  Yes, you are supposed to feel this way.   The reveal of the four-legged woman rather shocked me, as did the impressively large strong man and the man who bit off a chicken head.  Bryan Cardoz's "The Boss," introduces the show in the smarmy and slightly perverse way that a villain should, yet his singing did not convey the same message as his words...needing more of a character or speak-sing voice to make up for a weaker register.

The sets are non-existent.  The first back-drop you see is incredibly...bad.  I spent awhile analyzing whether this was on purpose or not and I finally came to the conclusion that it is an intentional off-kilter design to help facilitate the exact awkwardness I felt.  That being said, I was very impressed by the quality of the programs, the publicity posters, the t-shirts, and all electronic publicity materials.

Upon The Boss's introduction of Daisy and Violet Hilton, my first thought was a fear for their safety - not because of their horrible boss, but because the black, wheeled box they are placed upon did not want to move as much as the actors wanted it to move.  Second, their costumes confused me.  They were a featured act but were dressed in brown, burlap-like material with brown head wraps like Cinderella's days as a maid.  As the girls grow in fame, their costumes become fancier, explaining my previous confusion.  I think sets may have helped explain the situations more, however, as the show progresses, you understand more the choices for the minimalism.

My third thought?  WOW.  Swenson and Jeffries can put any songstress to shame.  Daisy (Swenson), with her illuminating smile and bright eyes is quickly established as the out-spoken flirt, while Violet (Jeffries) holds her posture and eyes just so as the shy sister.

At this point, we also hear more singing from all three male leads.  I can't say enough.  Each of them is fantastic in their own way.  Arteaga as Terry has a voice I wish could sing me to sleep each night and will cover your ear drums in velvet melodies.  His acting is not his strongest suit just yet, but I cannot wait to see where this young man goes.  Eliason as Buddy shines with his cheerfulness and pep, always the optimist and showing great range with his character's emotions near the end of the show.  "One Plus One Equals Three" particularly showcases his abilities as a triple-threat actor and was not only one of two toe-tapping (literally) numbers in the show, winning over audience smiles, but also my favorite non-twin number.  Howell as Jake may be the one who wins over the hearts of the audience members most as the faithful friend and hopeless love.  I had seen him in Parade at the Rose Wagner theater last year and found his performance commendable, but he has improved in leaps and bounds since then- I only recognized him because of his boundless energy and stage presence.  He has a rich, booming register that will leave you wanting more....and more.

The ensemble serves their purpose, were all fully committed, and were overall stronger than most community-theater level ensembles I have seen, however were over-shadowed by the immense talent of the leads.

Utah Repertory Theatre Company has more than a glimmer of hope at becoming what they want to be in regards to a higher standard of community theater.  But this makes me wonder - what exactly is a higher standard of community theater?  Director Hebda allowed a young lady with true handicapabilities to be part of this show...but would some of the more elite theaters in Utah have allowed participation?  I don't think they would.  There is a fine line regarding what is trying to be accomplished and I look forward to seeing what the future of this company brings.

In the talk-back session at the end of the show, we learned that Side Show was meant as an operetta and a lot of the dialogue had originally been song - further explaining the lyric-like, sing-songy dialogue and the frequent exposition singing about what each character is going to do next.

I love writing for my own blog rather than another institution because it enables me to write how I feel most appropriate instead of being given strict guidelines or needing to be strictly "professional."  This makes mingling with the cast afterward a little easier and also gives me the inside-scoop point-of-view instead of just a reviewer who saw X, Y, and Z occurring.

I am thankful for this with Side Show.  Why? The doors opened fifteen minutes late and there were sound difficulties aplenty (one loud screech right after the phrase, "Are you deaf" kinda cracked me up) throughout the show, although none at critical points.  Come to find out, the sound board went out right before show time and the whole cast/crew had to scramble to make accommodations for a scenario of which there is no way to prepare.  Therefore, I did not mention any associated difficulties as they will be fully resolved for consequent performances.  Hats off to director, Johnny Hebda, for finding a quick solution and for the cast for all being so light-spirited.

Side Show has intrigued me for years.  As a 16-year old girl, I remember watching Broadway Divas, Alice Ripley and Emily Skinner, belt out the words to power ballad, "I Will Never Leave You," during the Tony Awards.  I made my mother drive me 45-mintues to the nearest "Mommy go broke" store, aka Best Buy, to purchase the CD.   I remember dreaming, dreaming of the day I would ever see talent like theirs in person.  Through the years, I remember seeing ladies young and old alike attempt to conquer music from this show, only to fall short every time.

Ladies and gentlemen, Adrien (Daisy) and Angela (Violet), ever-so-humble, would fight me tooth and nail on this statement, but, off Broadway, you are not going to find a higher caliber than this effortlessly talented duo.  The trip to Provo was entirely worth it for these two alone.  Throw Aleksndr (Terry), Taylor (Buddy), and Cooper (Jake) into the mix, and I consider my time well-spent.

Yes, the show has weak points.  Yes, the show has some amazingly strong points.  No, the show is not the best quality I've seen in Utah.  No, it is by far not the worst I've seen.  Part of me longed for glitz and glamour, but the other part of me was fascinated by the bare-bones surroundings and this claustrophobic, semi-awkward setting because I imagine that atmosphere elicits the same feelings as a true side show.

If you are at all intrigued by the concept of the show and are not a self-proclaimed "theater snob," by all means, head to Provo and check out Side Show. 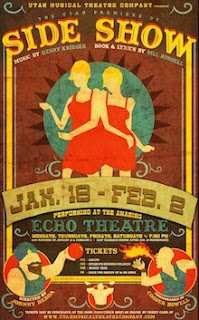 As the Four-Legged Woman, thanks for your nod and I'm glad I freaked you out a little. (slight pun) Your review was so well-written and spot on. Thank you for coming! ~Jen Mustoe

I'm definitely intrigued, and the preview video was good, too. Hope I can get down to Provo to check it out!