I went to the gun store last week with a good pal and we got into a rather interesting discussion.  Unfortunately, this was not the first time I'd had a similar discussion.

He began, "My parents were just in here last week buying guns."
I responded, "Why were they buying guns?  I didn't realize your dad was into shooting or hunting."
"They buy guns to protect their food storage."
"Oooooh.  Well, I'd rather die of starvation than shoot people to protect my food.  Cause you are eventually going to have to kill a lot of people because they'll keep coming and I just wouldn't want that much blood on my hands."
"Well, think about it - you need to protect your family!  It isn't just about you - it's about them."
"But you'll still have to kill a lot of people and you'll still get it taken in the end anyway.  How long are a few guns going to thwart people?  And what if they get hold of a gun?  Cause that will most likely be easier to get hold of than food."
"I don't know."

First of all, what a silly conversation.  Amiright?

Second, do I think this is all really going to happen?  No, no I don't.

Third, yes, I would really rather die of starvation than kill someone.

Fourth, did you know they have food storage vendors at gun shows?  Ha.

Have you all had this conversation before?  What's your take? 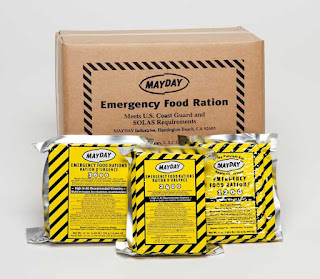 Karl and I have this conversation all the time. He wants to stockpile guns, but I think in the end, the most valuable item will be toilet paper. I'll be peacefully trading Charmin with Aloe Vera while Karl fends off the heathens with his weapons.

Food storage is ridiculous, and wasteful. Donate the food to people who really need it.

Anonymous, how on earth is food storage wasteful? You are constantly rotating and using what you have on hand-NOT stockpiling it and letting it sit there. You just have extra in case of an emergency. Experts say that in light of a natural disaster-earthquake, flood, tornado, etc...(NOT the apocalypse)it can take up to 92 hours for help to come for the people who need it, what about the people who aren't hurt but merely can't get where they need to go? How will YOU survive when there's no way to get to the store? Mooch off the 'ridiculous and wasteful' people who were prepared?
Or what about something as simple as losing your job and having no money for groceries? Or are you ok receiving welfare because again you failed to prepare?

Yup, definetely heard that sort of conversation before.

DH and I see no reason to need to prepare to "protect" our food sorage as we expect to either a) be asked by the ward or stake to turn it all over or b) share with the neighbors. Yes, it's a year's worth for 2 people, yet its also 3 days of food for ~250 people.

Oh, and Kristie has an excellent point about toilet paper.

W-O-W Kristen! Someone loves her some food storage! :-)

I am also rather surprised no one picked up on the hilarity of ME in a GUN STORE. Or maybe you all just assume this country bumpkin has a wild side.

Here's what Brother Vaughn J. Featherstone had to say about sharing our food storage:

"'Do I share with my neighbors who have not followed the counsel? And what about the nonmembers who do not have a years supply? Do we have to share with them?' No, we don't have to share—we get to share! Let us not be concerned about silly thoughts of whether we would share or not. Of course we would share! What would Jesus do? I could not possibly eat food and see my neighbors starving. And if you starve to death after sharing, 'greater love hath no man than this...' John 15:13" ("Food Storage," Ensign, May 1976, 116).

Angelina - thank you for that quote! I love it!

Food storage is a really good thought for a particular time being. You need proper packaging material to store all and keep it well. However, there is no better packaging material than China Aluminum Foil. They're fantastic and offer long-term security. You can obtain a low-cost purchasing price by doing some investigation.