Everyone is a critic.

We tend to believe there is an artform in proving our superiority through finding flaws.

But can't something just be good and can't we just enjoy it?

When you whittle away all of the trivial elements, I find the most important reason I attend theater is this: to feel something.

Midvale Main Street Theatre's production of On Golden Pond, a dramedy (drama/comedy) as directed by Eve Speer, made me feel.  Not just feel, actually, but sit back and analyze what my relationship with my family is like, what has changed us all throughout the years, and what brings us together.

Golden Pond is the place to where Ethel and Norman Thayer (Mary Mason and E. Timothy Schomburg) retreat each summer, which includes wacky local postman Charlie Martin (Joe Dutson).  This summer, their daughter Chelsea (Jennifer Mason) decides she must return for her father's birthday celebration in spite of their strained relationship.  She brings along her fiancee and his son - Bill and Billy Ray (Marc Reading and Austin Heaton)-  in hopes of leaving the boy with her parents while she and Bill gallivant off to Europe.  When Chelsea returns, she is somewhat disgruntled at finding Billy Ray has the relationship with her father that she never had.

The character interpretations are quite different (not in a bad way, just a different dynamic) than the classic film with Katharine Hepburn and Henry Fonda, which may or may not work for all audience members.  The marital relationship of Ethel and Norman seems quite like the mother and father from My Big Fat Greek Wedding where the man is humorously curmudgeonly, feisty, and somewhat chauvinistic in his feelings of superiority and stubbornness, yet we clearly see Ethel is the brains and teddy-bear heart of their life together.  I had a little bit of difficulty believing these two had been together for dozens of years, as Ethel almost seemed leery of physically touching Norman, but there was a playful banter (hence my reference to My Big Fat Greek Wedding) that worked and gave us a connection to the characters.

Audience members will find themselves laughing at all of Norman's quips and one-liners, especially when he begins interacting with the young Billy Ray.  Ethel sings to dolls, talks to loons, and makes me laugh at how much she represents the silly things we've all caught our mothers doing.

Charlie Martin (Joe Dutson) had a contagious laughter and well-represented himself as the loveable town goofball, however I was taken aback in disbelief at how the put-together Chelsea could have dated him for 11 (or was it 12?) summers.

Which brings me to Chelsea.  Jennifer Mason portrays her with grace and ballerina-esque poise.  You can see how she has this tension built inside that she wants to let go of, but somehow can't.  You see a glimpse of the loving, confident woman she has become when she lets go of the chip on her shoulder towards the end of the show when she is with her new husband in LA.  At first, I couldn't understand her interest in Bill Ray - he seemed too insecure and quirky.  But towards the end, you see how something about his unrelenting goofiness helps her feel safe with who she is.  The relationship still had me thinking, "Wow, he got the better end of that deal," but it worked....ish.  Jennifer's portrayal of Chelsea was the most convincing in the show for me, although I'm sure interacting on stage with her real-life mother brought a truth to her performance that is otherwise difficult to achieve.

Perhaps the actors weren't all as experienced as one might hope, perhaps the scene changes weren't quick, perhaps a couple of the actors stole 4th-wall breaking glances into the audience, perhaps some of the chemistry wasn't as spot-on as other productions.  But those things don't make me enjoy the show any less.  On Golden Pond's script is crisp and enjoyable even standing alone.

A show is like a roller coaster.  You wait in line for an hour for your three-minute ride.  The climb up the first hill seems like it is the longest, but once you are in the ride, you enjoy every up and down, twist and turn.  Most shows take a little while to win you over - establishing characters, warming up to the audience, and developing plot points.  But once that initial climb is over?  You get the thrill you came for.

In On Golden Pond, that thrill, for me, is after intermission during an interaction with real life mother and daughter team Mary and Jennifer Mason - playing Ethel and Chelsea Thayer.  They share a loving banter that morphs into an argument, where Chelsea exclaims,  "It doesn't matter!  I act like a big person everywhere else.  I'm in charge of Los Angeles.  And I come here, I feel like a little fat girl!"

How many times have we returned home, only to feel as if nothing has changed?  Only to feel as if none of our demons have never been conquered?   Only to feel as if a once-damaged relationship with a family member can never be mended?  We feel stuck, almost as if things can't change.  I do not think it far-fetched to say that I am not the only one with whom these sentiments hit home.

Midvale Main Street Theatre has done an excellent job with providing our community with shows that many other theaters will not because they aren't the Disney-fied "family friendly" standards.  They also have formed a little community of their own - embracing all of their performers and audience members as family.  My heart was deeply touched to see photos on set of Kat Stoutsenberger, who recently suddenly and unexpectedly passed away.  I love the tribute to her and her amazing gift of talent with the small way of always keeping her on stage there in Midvale.  After the show, more audience members poured in for a night of improv with comedy troupe Quick Wits - which I highly recommend sticking around the theater for - you'll laugh your butt off.

This weekend is your last chance to see On Golden Pond - May 24-26th at 7pm - what a great summer show to ring in the season and set your hearts on the hopes of what the next few months hold for you.  You can purchase tickets here.  Quick Wits performs at 10pm on Friday and Saturday nights. 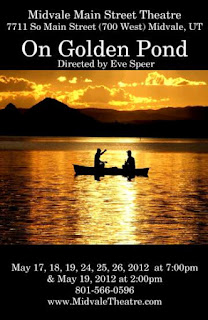 It is really awesome to experience momentum on a boat floating around and experiencing the best environment. You can check out the Tahoe pontoon boat rentals for the best price. They are also ensuring the client's safety. You can have the best time and different views at different seasons.

you have provided every time informative post. Thanks for sharing