When Your Bridesmaid Dress Doesn't Fit

What I should think
Bridesmaid Dress:  $99
Dress Custom-Made to Measurements: $40
Shipping from China: $30
Red Crinoline: $30
Being Maid of Honor for my Sister's Wedding: Priceless

What I actually think
Bridesmaid Dress that I'll never wear again:  $99
Dress Custom-Made to Measurements that are clearly not mine but more likely a DDD buxom
bombshell of a lady six-foot or taller: $40
Shipping from China for each of seven dresses even though it was all in one box and there is no
way the slowest shipping on the slowest boat from China was that expensive: $30
Red Crinoline for under the dress that is so ill-fitted the crinoline makes me look like an obese
tub-o-lard clown and will never be worn, ever: $30
Alterations: $Kajillion that I don't want to spend because why spend another $100 in the case that
the dress maybe might look a little better?
Total Cost: $199 + $Kajillion thrown right into the garbage disposal + incredible angst over looking
terrible in all of the wedding pictures that will exist F.O.R.E.V.E.R.

I really shouldn't let these kinds of things peeve me.  Long story short, I used to look half-of-adorable and now I'm actually capable on rare occasions of looking adorable-and-a-half.  Some weird self-esteem tornado comes and takes me away when I have to revert back to a state that caused me some emotional grief to say the least.  Should I let appearances bother me this much?  No.  But it is my sister's wedding!  I am maid of honor!  Who wouldn't want to look top-notch?

You may think I am exaggerating, but when I put the dress on for my co-workers, they agreed.  We also all agreed that maybe just adding straps would take care of the bulk of the problem, which is mostly that the chest is two inches too large.  Yep.  Not a recipe for success when there are no straps.  And about six inches too long.  So much for custom measurements.  If I wear the dress as-is, I am a shoo-in for an accidental hybrid episode of Girls Gone Wild and What Not to Wear.

I have some options for a fix so the dress isn't as bad - don't worry.  I just needed a good vent...and a post that will embarrass me when I look back in a year. 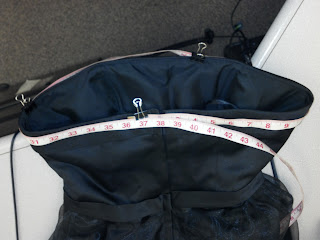 This is why it's better to be a groomsman. I just had to wear a tie.

*soothing mom voice* Don't worry, we'll work it out. My mom will be here in about two weeks and if she can alter a bodice that was two SIZES too big for me and make me look great in my caroler costume she'll be able to help you. She's an amazing seamstress--and I'm NOT just saying that because she's my mom.
You may not even have to add straps! Well-unless you want them, anyway...

What's the deal with the crinoline?

I love you, Kristen. And not just for this.
The Crinoline? It was a one-size-fits-most deal. I figure I'm about average size, but apparently I forgot that average is size 12, of which I am not. And it said it was 21 inches and it practically goes to my ankles. And it is like 5 times more voluminous than I was thinking. I want one of those brilliantly soft, chiffon-layer petticoat/crinoline's - not a clown skirt:-( C'est la vie! Sis said she is fine without it.

I'll let you borrow my white chrinoline, if you want it. You could also try Bettie Page at the Gateway downtown... if you're still interested in buying. They might even have them on sale.

Good luck, sweetie. I'm sorry your bridesmaid dress has been so disappointing so far!

Also-it's Halloweentime...check the costume stores for a crinoline. You might be able to find one for cheap, and then sell the one you have on ebay or something?

I'm not buying a crinoline online - they are all that tulle material and I'd want something chiffony and now I'm too paranoid the thing won't fit...and I already spent $30 on one. And I'd rather spend the money on alterations than on another crinoline that "might" work. Trust me, I looked for two months before I bought one - I picked the three best options and sis picked which one she liked best.