I don't know where to begin.

Russ McBride entered my life almost two years ago exactly.  And what a thundering entrance.  My cast of 1940s Radio Hour had just completed our performance and were letting people "run the gauntlet" (where you have to walk past all the cast members to get out) as they exited the theater.  Russ had come with his son, Nik, and kept gushing to us about how much he enjoyed the show - so much, in fact, he promised to return if we checked out his improv group, "Quick Wits."

I recall those snowy December evenings with warmth and love.  My cast ventured over to Midvale Main Street Theater several times to laugh, eat junk food, and enjoy each other.  Russ pulled me onto stage as his wife for the newlywed game my first time at Quick Wits and boy was it a hoot playing his white trash babe.  He told me he knew we'd be good friends after he first asked me, regarding our upcoming sketch, "Alright so what do you want to do?" I smiled coyly at him and winked as I said, "You."  Then I laughed myself silly because I have no seriousness behind what I say, I just think it is funny.  I'm glad he did too because friends we became.  Dear friends.

This weekend, we lost Russ to a massive, unexpected stroke.  I lost a constant support, a friend, and a source of more laughs than I can count.  Yet, the memories I have are priceless and will be with me forever.

Here are a few stories:

- I was down and out about my relationship choices, so I posed a question on my blog about what type of man you would see me with.  Russ responded with this: This is such a great question...How many of us have heard "I never would have seen you two together in a million years...."..there are so many factors that play into the final decision of a significant other..with that being said I truly feel that no matter what "type" fits you, there are some qualities that I feel you ultimately deserve (sappy moment alert)..granted I have not spent enough quality time to get an accurate account of your type..but you are so well rounded that I can only assume so many types fit your personality...someone that can make you laugh, not just few moments of LOLs but even just the times when a past moment brings a chuckle or a giggle or even a slight grin, I loved the comment of " but is no wallflower himself (as in, he'll join in conversations you're having even if he doesn't know the people well or at all)", you seem to have the ability to be the life of the party without having to know ANYONE at the party and you don't want to have to babysit or make sure he is having a good time, you want to interact with everyone..someone who enjoys the arts but at the very least will support you in them..someone whose knees get weak and breath becomes short because you simply walked into the room, even 60 years later...someone who becomes stronger and better because you are beside them...when all dates are filled with the excitement and giddiness of a first date, whether going to the ballet or sitting home watching a dvd...when there is no reason needed to get you chocolates, flowers, a card or even a little toy out of the .25 cent machine...someone to, at the very least, OFFER to help cook and clean...Wow this is very sappy, I could go on and on...I don't think any of this actually even answered the question. You have so many different types that you have dated cause you are that rare person that truly cares for everyone.

- I blogged about wanting a certain dress.   Within a week, I received a message from Russ, "I have that dress for you."  The story is here.  Of course, he told me he had some connection and got the dress inexpensively and would not let me pay him back.  Two other times I asked if his connection could help me get some spendy dresses I wanted and both times he said, "Absolutely."  Upon asking him how much I owed him, he would never let me pay him back.  I asked him over and over, but he would never let me.  One time, my friend loved one of the dresses as much as I do, and he got one for her too!

- I had mentioned something to him about how I used to make Easter baskets for all my roommates and how, now that I live alone, I made my own basket and had no one else to give one too.  And you know what?  I went to Quick Wits one night and they said, "We have something for you!"  It was a huge Easter basket!  From Russ!

- I was auditioning for a lot of shows and doubting if I deserved a lead or even a part at all.  He had seen me perform several times and spent a late evening after Quick Wits talking with me outside into the wee hours - about performing, life, and just anything that came up to help me with perspective.  When I got the leading role in a show, he bought me a ticket to another theater company who was doing the show so I could see what I was getting myself into.

-Opening night of my show, with my first lead lead, I received a gift at intermission.  "Someone brought these and asked us to give them to you."  I read the card.  Russ.  Two dozen roses.  He couldn't stay for the show, but wanted me to know how much I deserved this moment.

- I got stranded at a rest stop near Brigham City.  As soon as I posted it, Russ was on the phone asking what he could do to help and if he needed to come rescue me.  Some friends near me responded and came to my aid just as he was leaving his house, so I called to tell him he didn't need to come.

- My mom came into town and I took her to Quick Wits.  Russ went out of his way to come talk to us for the entire intermission.  As he had done the year prior when my sister and her friends came into town.  He made a huge impression on all of them and, even after only fifteen minutes, they'd all regularly ask how that nice, funny guy from improv was doing.

- Last Saturday November 24 he performed with Quick Wits - he may have been planning on performing anyway, but I had texted him several times begging him to be there because my sissy likes him most and she was in town from Ohio with her new hubby.  Once he told me he'd be there, I invited several more friends out.  That evening, we talked and he told me he almost didn't make it but was glad he did and glad he got to see us.

- He supported many of my friends in many of their shows and even met a group of us to support Megan in Beauty and Nichole in Annie Get Your Gun.

- Most importantly, Russ's constant support and words of kindness helped me, along with the support of a handful of others, avoid marrying the wrong man.  He literally helped change my life.

- We would e-mail all the time for about a year.  This communication dissipated after I started dating my Rob, a Quick Wits teammate.  I'm not sure if Russ felt I no longer needed him, if life got busy, or a multitude of other reasons.  He was always there with his words to give me a boost.  I tried to do the same for him, he was just so much better at it.

Some of the inspiring/funny/random thoughts he shared with me are below, all exactly his words from e-mails:

I haven't lost anyone close to me in a good, long while.  Life is delicate, fragile, and fleeting.  I despise the "He is in a better place now"-esque comments.  I know, I get it.  But right now?  Right now, I miss his presence.  Right now, I keep expecting to see him walk around the corner flipping his water bottle and coyly smiling saying it was all a joke.  Right now, I wish I could hear him talk about his amazing son one more time.  Or give me a huge hug.  Or send me a message just to say hi like he so often did.  Right now, I have a hard time comprehending all of those things will never happen again.  Right now, I am eternally grateful for this man who touched my life and changed my course.  Russ had a way of making everyone around him feel like a million bucks.

We love you, Russ. 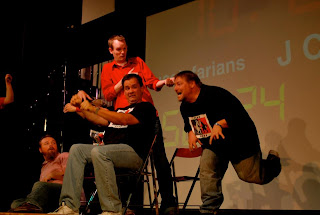 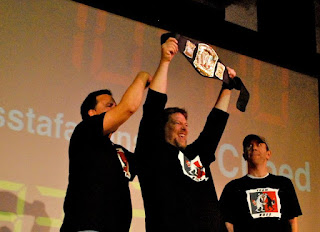 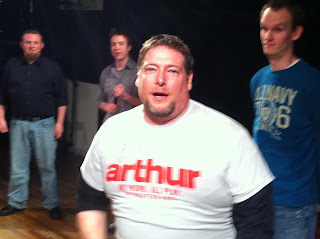 This was beautiful Larissa. It's been quite the emotional weekend with Russ leaving us, and I am thankful for your amazing words. He treated me like gold and will miss improvising with him as well.

Thanks for the article... Loved it.

That is very sweet and you can tell he is a great guy. Also, it honestly sounds like he was in love with you!

Anyways, I'm sure he misses you as much as you miss him. Take care and God be with you through this hard time.

Russ loved everyone. And he would share with them the things he knew they needed to hear. If more people shared their unbridled thoughts to others, what wonderful knowledge we would all have about ourselves:-) Our friendship was strictly platonic, I assure you:-) He knew I was desperately in need of reassurance regarding decisions I had made to end a long-term relationship and try to move forward.