Friday evening I had an intense session with the trainer before heading off to practice more for the "tap-dancing nuns" number. Fresh out of water, I decided to fill up my Super Big Gulp cup at the closest 7-11. I asked the cashiers if there would be a charge for the water, knowing that they never charge for filling your own cup with water, but wanting to be honest just in case policy has changed. They, of course, said no but that there would be a charge for the cup. The following conversation ensued:

You can tell when someone does and doesn't believe you and they most definitely think I am a thief.
Naturally, the next day, I stopped by the same 7-11 on my way to rehearsal. Man 1 was working with a line of 5 or 6 people at the register, but I SHOUTED as I entered, "I'm bringing in a refill cup!" As I walked out, not even waiting in the line, I just shouted, "I just filled it up with water!" He nodded and said, "Thank you."
The lesson I learned? The people at 7-11 like annoying, loud people more than honest, quiet people. I just wanted a super big gulp of water! 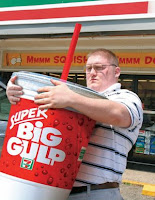 Sheesh. Nuns don't lie.
I tried a translator to get that sentence into Latin. The translation it gave me, I could tell, wasn't about telling the truth, but was the other version of "lie," which, uh, I guess nuns, in a way, don't really do either.