My sister is leaving to move home to Ohio to be with the man she loves - blah blah, insert romantic sappiness. I understand, but that doesn't mean I won't burst into tears at amazingly random times quite often throughout the next few weeks.
Before she decided to leave me for Haines (no, not the underwear - that is really his name), she had a birthday. For her birthday, I thought it would be fun to have a sister's day out once she had recuperated from her surgery the previous day. I bought concert tickets for Ingrid Michaelson's Hotel Cafe Tour, a promise of a treat to her favorite restaurant, and a trip to the spa to get deluxe pedicures/glitter toes. We decided to make an entire day of it and had breakfast together, went shopping for new glasses for me, etc.
The concert tickets stated the show started at 6:30, but those little scallywags didn't start until 7:30! We got a little bored and decided to take pictures of ourselves. When we were reviewing the photos, Brit started cracking up because she had made a stupid face in one of the photos. I immediately started laughing, telling her, "Oh wait, it gets better!" I flipped to the previous picture where I had been making a stupid face. We didn't plan that little spectacle - we had no idea what the other was doing! We had a good laugh out of that one - great minds think alike! 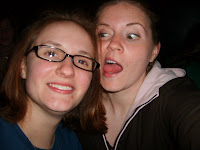 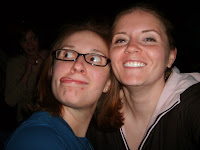 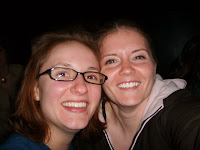 "Haines (no, not the underwear - that is really his name)" Thank you for the clarification ^-^